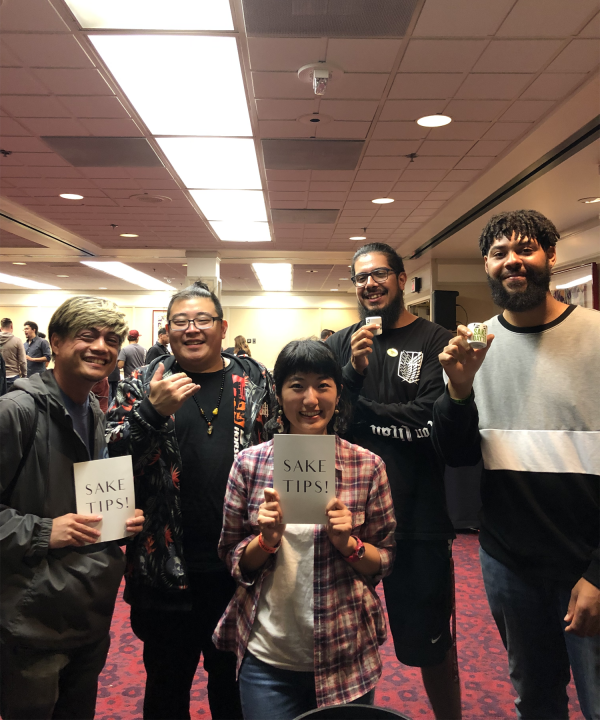 Written by Hanako
Translated by Yoko

“More and more people are enjoying sake in the United States.”

When I heard this from a member of SakeTips! around a year ago, I never imagined that I would see this fact for myself.

I am a freelance dietitian and hakko fermentation lover from Fukuoka, Japan. I love making my own seasonings. I also love to fill people in on the finer points of fermentation and how interesting making seasonings can be. Before meeting a member of SakeTips!, I was just a lover of brews such as sake, wine and beer, someone who enjoys them with meals: however, my encounter with members led me to join SakeTips! one year ago in order to provide my own recipes of hakko dishes best served with sake.

I love traveling abroad. I have been to about 10 western countries so far. Now Japanese food is famous and well-loved around the world. I had always dreamed of having the opportunity to introduce the finer points of fermentation to local people while traveling abroad. Therefore, when I heard of this event, I thought it would be the chance I’d been looking for and decided to come to the United States. As a result, I was able to learn much more than I had expected.

Generally speaking, sake kasu is mainly used for kasujiru or amazake in Japan, but to be honest, sake kasu is not a major ingredient in Japan either. This event is the best opportunity to introduce the finer points of sake kasu to foreign people. To maximize this opportunity and make people feel familiar with sake kasu, I decided to prepare drinks that could be easily cooked with readily available ingredient all over the world. Then, I tried several drinks such as coffee, cocoa, and green tea. Following this, I chose 2 drinks that taste the best for the event.

I tried these drinks in Japan before the event several times and they went well. However, I had to get ingredients on the spot, in addition to having to prepare drinks for hundreds of people. Therefore, I felt a little uneasy, but I was more excited.

A Gift Sake Kasu Gave Me in San Francisco

I asked several Japanese people such as a brewery employee to try the sake kasu drinks before the event and they were both highly rated, so I was expecting them to receive positive reactions from the American participants, too. However, the reactions of American participants were not good at the beginning.
By contrast, participants at other booths looked very happy. This difference shocked me and I thought that it would be difficult for sake kasu to receive high evaluations from Americans.

At this time, I got some advice from a local Japanese person. She advised me: “American people tend to like rich tastes. If you use blueberry jam as an ingredient, then it needs to have a strong blueberry flavor, otherwise they will find it bland.” The Japanese tend to like light and healthy tastes, while Americans the opposite. Therefore, based on her advice, I put more jam into my sake kasu shakes and made them sweeter and fruitier. Soon, I saw an effect. More and more people started to enjoy them and give them positive evaluations.

A lot of participants visited our booth and expressed their opinions on my drinks. What particularly impressed me was the extreme opinions most of them had on the two drinks; some loved the tea but hated the shake, while others loved the shake and hated the tea.

I like the way that American people wear their emotions on their faces. They are also willing to express their opinions when I ask for advice. When they feel it’s tasty, they try to do their best to say so. Those moving reactions made me so happy and excited that I became very much motivated to try harder in the future.

What made me happiest was that I was able to appreciate people’s reactions to my drinks directly.
Their smiles and their comments of “tasty!” made me super happy (You can read examples on the previous event report). Among them, there were some people who showed interest in sake kasu or some people who loved my drinks so much that they asked for a refill many times. There was even a person who loved the sake kasu tea so much that she asked me whether she could buy it and got so disappointed to know that the drink was not for sale. When I think of each person’s face, it makes me nice and warm inside. It was a shame that I could not communicate with them as much as I would have wished to because of my English ability, yet I was very thankful to them for their considerate, warm and powerful expressions which broke the language barrier.

Nowadays, many people use the internet for communication or to get to know someone: however the biggest result that I gained this time in San Francisco was the warm and exciting face-to face communication with the Americans and the motivation and confidence that this experience gave to me.

The American sake fans at SAKE DAY were quite earnest. Going by their serious looks and enthusiastic but mindful attitude, I imagined that for them sake was not alcohol just for fun, but might be a part of their lives or a thing that can enrich their lives, which is an ideal way to enjoy alcohol for me. I’m not sure if my imagination is correct, but I was happy to see those earnest fans and I received such wonderful inspiration from them.

At the same time, I learned firsthand how different our tastes can be depending on the environment or country a person comes from and how little sake kasu is known by Americans though this event. Today, it often seems like we can access or provide any information as we want: however, this event reminded me that this is not necessarily true. I want to share the finer points of sake kasu more than ever before and bring it to the attention of everyone!