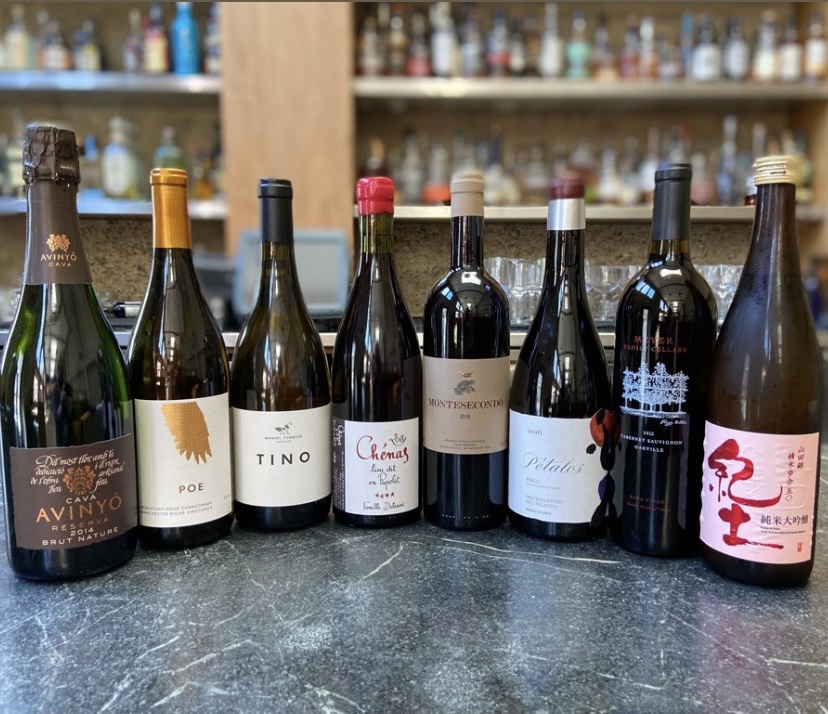 There is no doubt that 2020 will go down in history as one of the most difficult, disease-ridden and economically destructive years known to man. Yet somehow, when there is nothing to do and no plans to be made, revelations spring up left and right.

Beyond the obvious highlights of 2020, this glorious year was the first time I ever set foot in my soul’s home, Japan. That was early this year, when the future seemed bright. Another fortuitous event was being promoted to Wine Director at a restaurant called Foreign Cinema in San Francisco. I was a longtime sommelier at the establishment while also working part-time at True Sake, the first sake store in America. This promotion was a major stepping stone, not only for my career but for the future of sake in this city. My inspiration for sake is part of the reason I pursued certification to teach sake courses for the Wine Spirit and Education Trust. My goal is to expose both consumers and professionals to the magic of this beverage. Interestingly, that has to happen simultaneously for this sector of the industry to progress.

On March 16th, 2020, literally one week after the formal announcement of my new position, San Francisco announced shelter in place. A few months later, businesses began to open in reduced capacities. Although I have been focused mostly on adjusting the wine program with the constantly changing city regulations due to Covid-19; here are some of the eye-opening revelations I have witnessed since introducing sake to the beverage program of a restaurant with no Japanese influence.

When thinking of what beverages will complement a restaurant’s beverage program, the first question is what is the cuisine? At its core, the restaurant I work for focuses on local Californian ingredients with some French and North African influences. The wine list I inherited is heavy on French and Italian wine, with some innovative wines from outlying regions such as Subotica, Serbia and the Canary Islands, Spain. Many natural wines have a home on this list and some of the best Burgundian producers are featured. Placing sake in a small Japanese category on a list this deep (1300 selections) is futile. Most customers have hard enough time finding wines they are looking for, let alone obscurities such as this.

The next question is, what is sake? Those of us in the sake industry know exactly what it is. It is an alcoholic beverage made from rice, with a conversion of starch to sugar by aspergillus oryzae, aka kōji mold, which is then simultaneously digested by yeast in a process called multiple parallel fermentation. Wow… there is a lot to say when defining what sake is. That is a very brief and incomplete description of how the product is made. To simplify, most sake industry folk say that it is a beverage made from rice which is brewed more similarly to beer, but drinks like wine. Ok, that kind of makes sense. But if it’s brewed like beer, does that mean it has bubbles? Can it be made with grains other than rice? How does it taste like wine if it’s ‘brewed’? Here we go down the rabbit hole. The point of my digression is to illustrate how difficult it is to explain to someone who has very little to no experience of sake, what sake actually is. This issue leads to my next observation.

Luckily, the word ‘sake’ rings a bell to the majority of people who dine in San Francisco. But that ringing of a bell can ignite memories which almost immediately shut sake down as some brutal beverage with hangovers written all over it. This viewpoint comes from people having their first sake experiences at bars or restaurants where they are served (and most likely overserved) poor quality hot sake and/or the infamous ‘sake bomb.’ Sake bombs are pointless considering most sake clock in at 15% alcohol content and are weak in the realm of spirit abv’s. If you want to get serious, try a Car Bomb on St. Patty’s Day (stout beer with a shot of ½ Irish cream liqueur and ½ irish whiskey). Somehow, stout beer, Irish cream and whiskey all steer clear of criticism, even though consuming more than 1 of these intense concoctions will knock you on your keister. Sake on the other hand, pays the eternal price. Because so many consumers have no idea what sake is, it is remembered as some demonic foreign drink that got them “soooo drunk” many moons ago.

The major observation I came across while assessing our product reports is that sake is more accepted as a spirit-like beverage. My first try at positioning sake was a suggestion by our chef/owner, Gayle Pirie. She felt passionately about showcasing a fantastic sake as an alternative to dessert or even as an elegant pairing. The idea worked immediately and so far I have featured the following classics as our ‘Liquid Finish’ over the course of this year.


All of these sake were relatively successful as after dinner drinks. Hands down the most victorious liquid finish was Murai Family Nigori Genshu. Nigori being a familiar sake term with positive connotations, it was sold easily without suggestion. This rich, textural nigori with aromas of coconut and vanilla bean worked wonders with the chocolate pot de crème.

The most difficult and slow to sell were the sakes featured without a pairing. I felt they could stand on their own and would only be distracted by a sweet dessert. These would be better paired with savory foods, which is a bit more challenging considering a guest would have to forgo a cocktail or wine and trust that sake is the best complement to their meal. I hoped someone would order these in lieu of amaro or fortified wine. 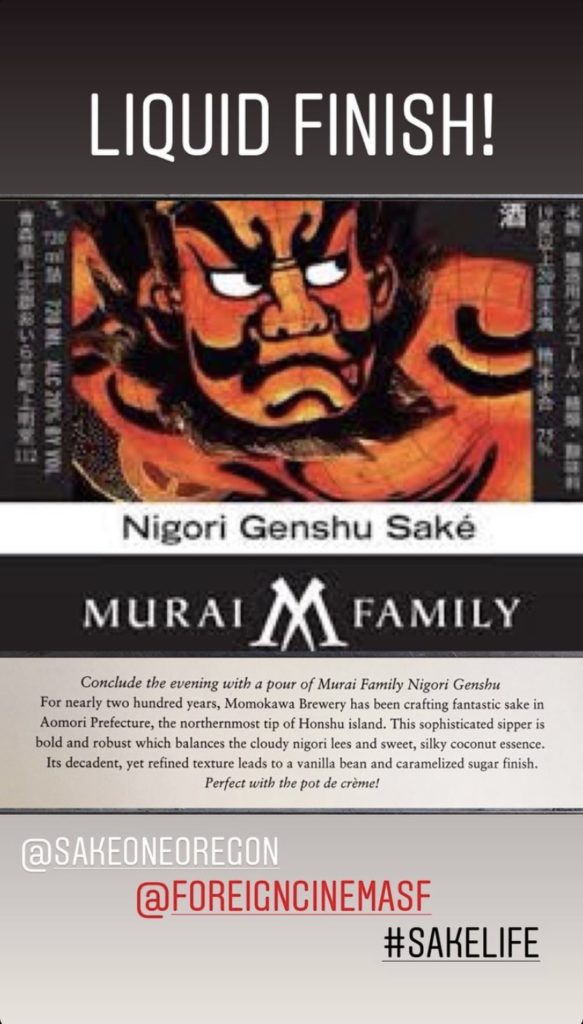 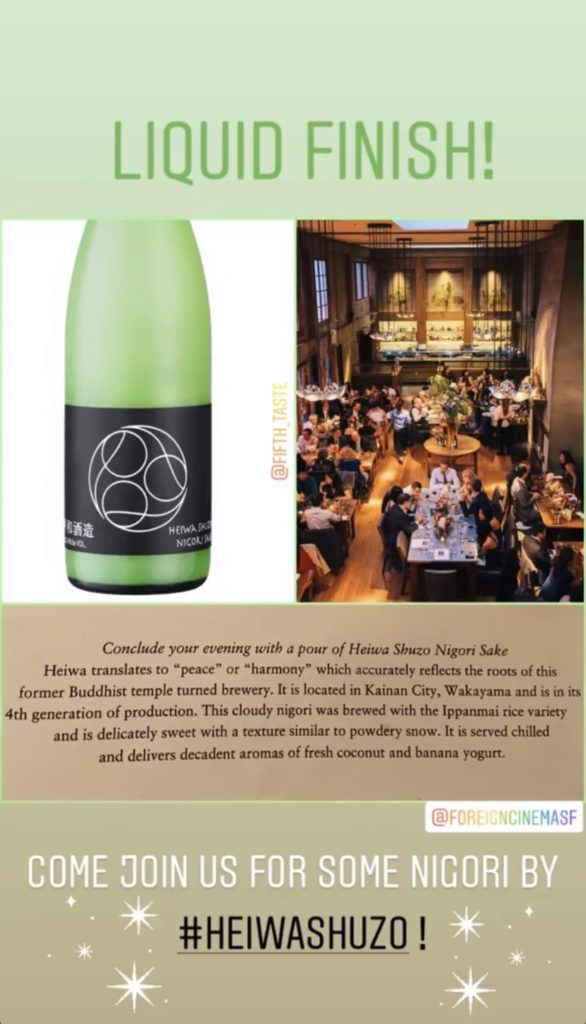 Utilizing the Concept of Food and Beverage Pairing

On the front of every Foreign Cinema menu is a featured beverage pairing with one of our nightly dishes. This is the holy grail and the ultimate place to sell a particular selection. We can easily go through an entire case of something by placing it here and writing an enticing pairing note. Sake will sell occasionally here, but this is when the consumer’s fear is front and center. They are faced with the option of picking sake (instead of wine or something else) as their main libation for the evening. Unfortunately, only a glass or two of sake usually sells as a main course pairing, even if the price is right.


Namazake tends to be triumphant when explained on a menu description. People love the idea of seasonality and the fact that it’s fresh and pure plays into people’s ideas of what a healthy lifestyle is. It feels somewhat similar to featuring a (non-faulty) natural wine. Heiwa Shuzo’s Hiyaoroshi sold easily as liquid finish this autumn for the same reason. Daiginjo is somewhat recognizable and if a sake drinker walks in and sees this style featured, they jump in and order it. The $12 options were the least acknowledged. Believe it or not, customers tend to distrust any wine by the glass priced lower than $14. The Taiheizan Kimoto Junmai, although a perfect pairing with bavette steak, stood no chance next to our $25 Napa Cabernet or our $16 Crozes-Hermitage Syrah as the preferred choice for the entrée.


Here I brought back the Murai Family Nigori, a fan favorite. The flight moves slowly (about 1-2 sold per night), but when sake is displayed in various places on the menu, the consumer gains confidence and ends up choosing one, usually the liquid finish (and the last sake they see). The flights are served as 3oz pours in stemless wine tumblers. Customers also have the option of saving the nigori pour for their dessert course. We normally have three flights featured at any given time and this one is holding its own with our wine focused flights.

Sake featured as a by the glass option along with all the other wines by the glass proved to be a major fail. In the summer, I sneakily positioned a Junmai Ginjo at the bottom of the white wine section, hoping someone would see it and just go for it. Absolutely no one ordered it. I left it on for 3 days before sheepishly taking it off. It makes sense that putting it in the wine section wasn’t appropriate, but I so desperately wanted to normalize ordering sake. This was definitely not a good technique.


■GET THE STAFF ON YOUR SIDE:
Sake sells infinitely better with staff members who are excited about it. Luckily, I am two years into teaching weekly wine classes with a staff that for the most part has stayed stable. I make sure to include a sake or two at the end of each class, throwing a bit of theory their way and exciting them about the products without pressure. It’s great to see their eyes open to a completely new category and it makes it much easier to sell a sake added to the list with their backbone of knowledge that has been built over time.

I have a couple of servers who can sell sake like nobody’s business. All I have to do is have them taste something new and they’re on it. One awesome development which happened without my encouragement was our bartender Bryan and one of our longest standing servers Davitas deciding to sell cocktails infused with sake. They love selling oddball liqueurs and making specialty cocktails for interested guests. One day they started substituting premium sake for dry vermouth in martinis. Customers went nuts over the change and they started selling like crazy. It also influenced the customer to taste the sake as a pour on its own. I know it seems blasphemous to include sake in a cocktail, but if most people associate sake with high abvs and after dinner drinks, it makes perfect sense that this method could ignite interest and could very well be a gateway into the sake category.


Although this year has been challenging in so many ways, I see great promise as we long to embrace each other again, which will inevitably happen in the months and years to come. I see connections coming from all over the world and an easing of judgements against our own differences. These fundamental changes in our culture will transform us for the better and slowly but surely, that strange rice wine from the east will finally find its place in our hearts.