Written by Hanako
Translated by Yoko

“Sake Matsuri (The Sake Festival)” is a two-day-long celebration, which takes place annually on the second weekend of October, mainly at Saijo Central Park and Saijo Sakagura-dori area in Higashi-Hirosima City, Hiroshima.

Saijo is a unique town where sake breweries are so densely packed that you can walk between 7 different breweries on foot.

The Sake Festival itself is a big event where you are free to walk from brewery to brewery, which are not usually open to visitors and where you can attend paid tastings and get products limited to the Sake Festival. You can also sample Japanese tapas and other foods as well as enjoy the cultural stage.

■ The Situation Before the Sake Festival

In 2018, the Sake Festival was held on the 6th and 7th of October. I attended on the 6th. Since a typhoon had been spotted approaching Hiroshima, there was the real possibility of the event getting cancelled up until just before the festival, but it cleared up and we were able to hold the event on a sunny day.

However, since it was very windy, the “Sake Plaza”, where you can sample any one of around 1,000 kinds of local Sake from all over Japan with an admission ticket, was canceled.

There was another concern about the festival. Because of the heavy rain in west Japan in July, JR train service between Hiroshima and Saijo station had been temporarily suspended.

But with the support of many people, the service resumed in mid September and this helped lots of visitors to come to Saijo.

■ Where To Start My First Cup?

The main events of the Sake Festival are paid tastings at each brewery.

I started my first cup at “Sanyotsuru.”

The paid tastings starts from 100 yen. The price changes depending on its grade and each cup contains about 60ml. 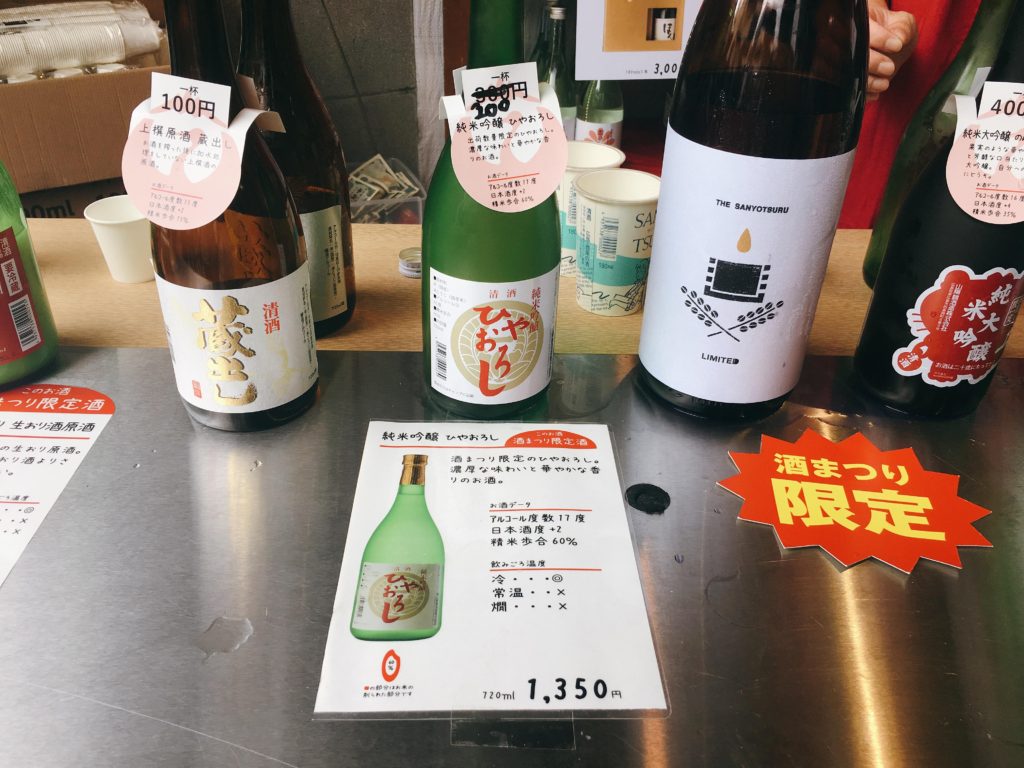 I selected Junmai Ginjo Hiyaoroshi as my first cup.

Knowing that this was a limited sake for the Sake Festival, I just had to try it. It was almost as hot as autumn on that day, so fresh Hiyaoroshi was just perfect.

By the way, you can enjoy the local specialty “Bisho-nabe” at the Sake Festival. You usually need to make reservation in advance, but fortunately Sanyo Tsuru was accepting reservations the day of, so I made a reservation for lunch and headed off to the next brewery.

Tips to enjoy the Sake Festival #1
Make a team so that you can enjoy a variety of sake
Since each cup’s quantity is fixed, you have to drink a lot if you want to try many kinds of sake. But, if you make a team of 2 or more, you can share a cup and enjoy a variety of sake at a single brewery. This time, I made a team of 6. Each person bought different types of sake and we shared with each other.
If you want to know more about the difference in taste of sake, the Sake Festival might be the best opportunity to sample different types of sake.

◾Hakubotan Brewery Where You Can Enjoy Shopping As Well

The next stop was Hakubotan Brewery.

At Hakubotan Brewery, a sake treat was prepared. 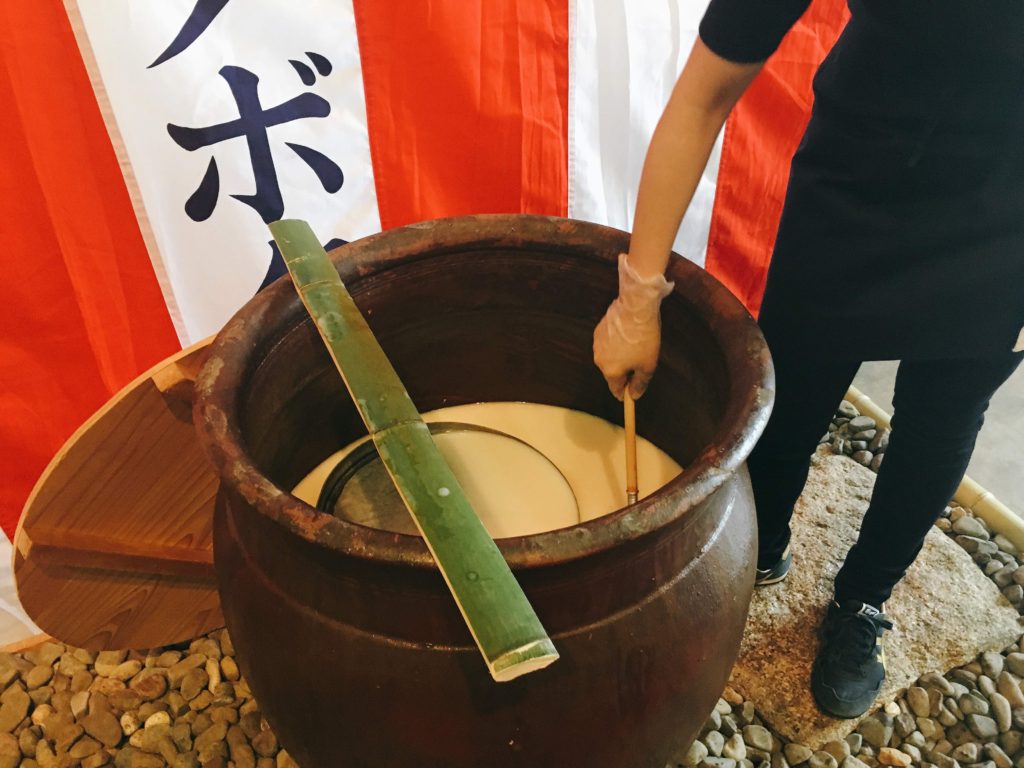 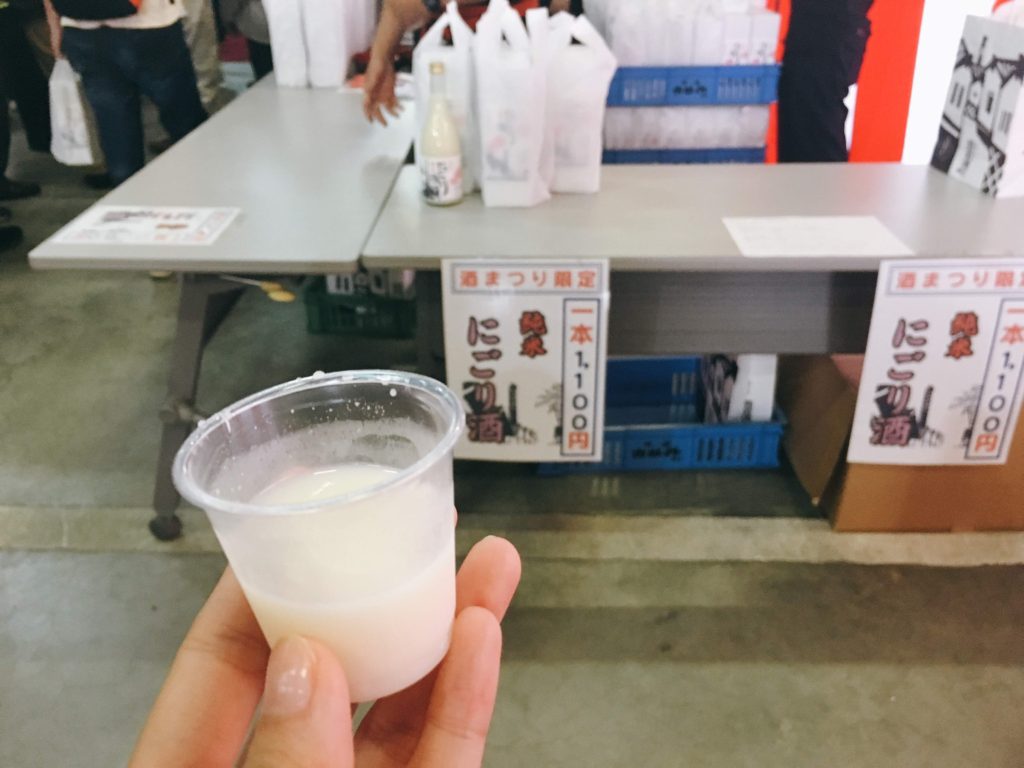 This is Junmai Nigori Shu. It treated me well.

It tasted rich like amazeke (sweet, low- or non-alcohol drink made from fermented rice).

When I went through the storehouse that is usually not open to visitors, sake kasu (sake lees) and amazeke were on sale. Surprisingly, sake kasu of new sake wewe only 200 yen, so I couldn’t help buying some.

Here are the recipes for sake kasu: 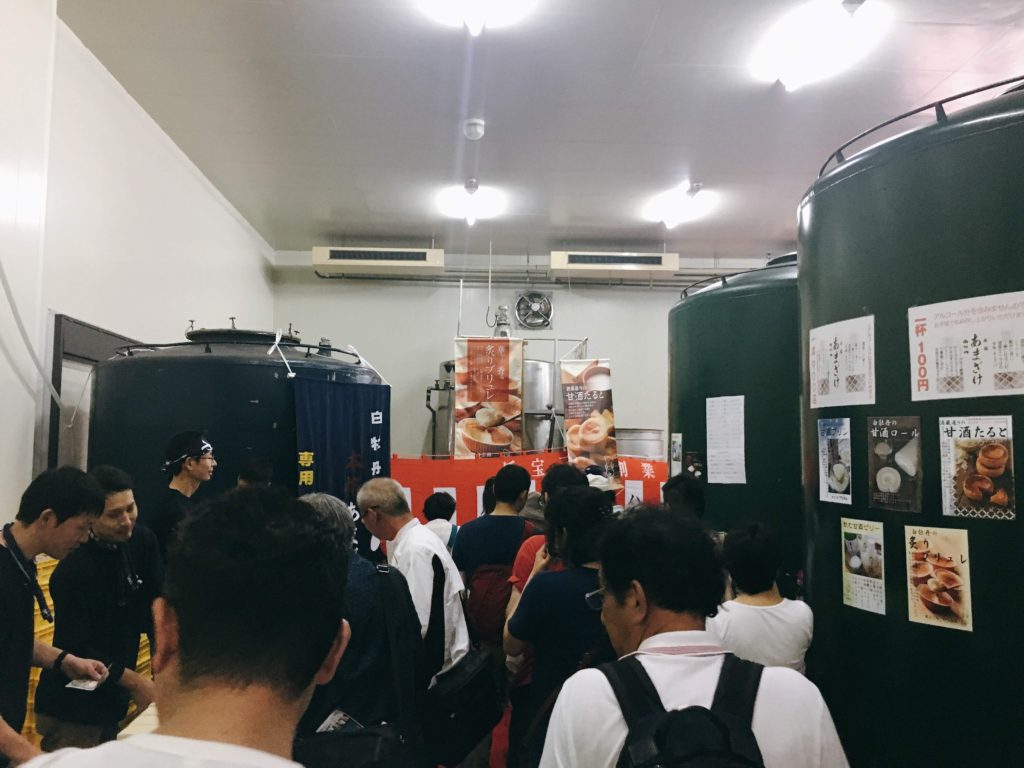 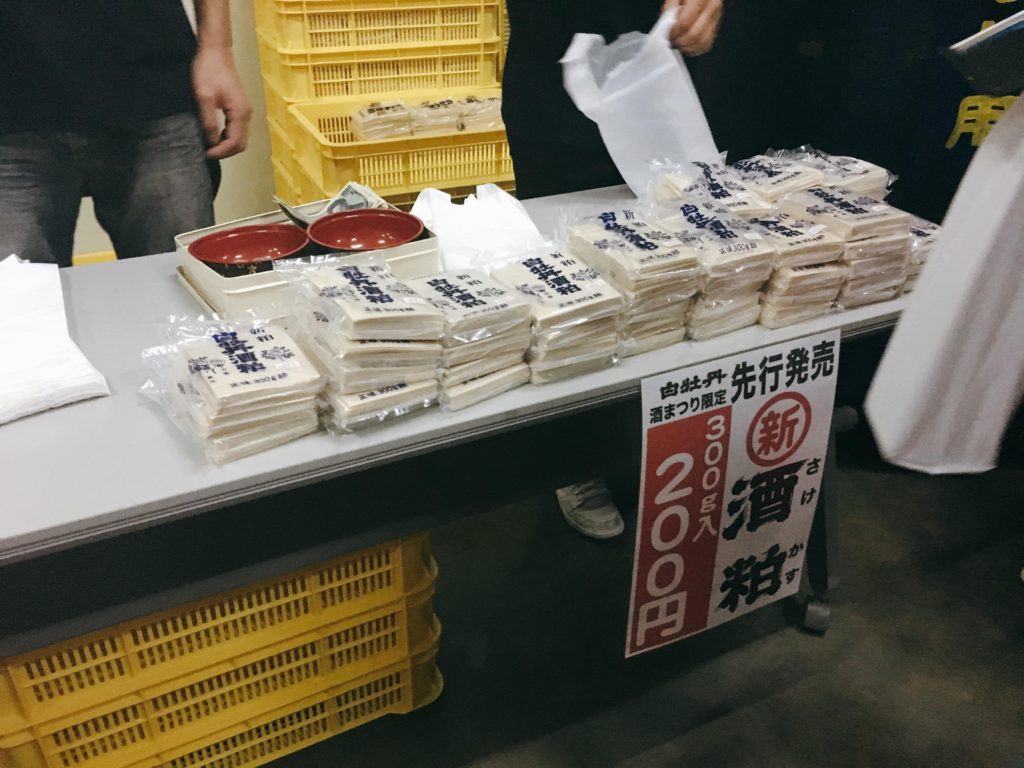 Proceeding further inside, there was a paid tasking area.

Sake was in stylish bottles and looked classy. 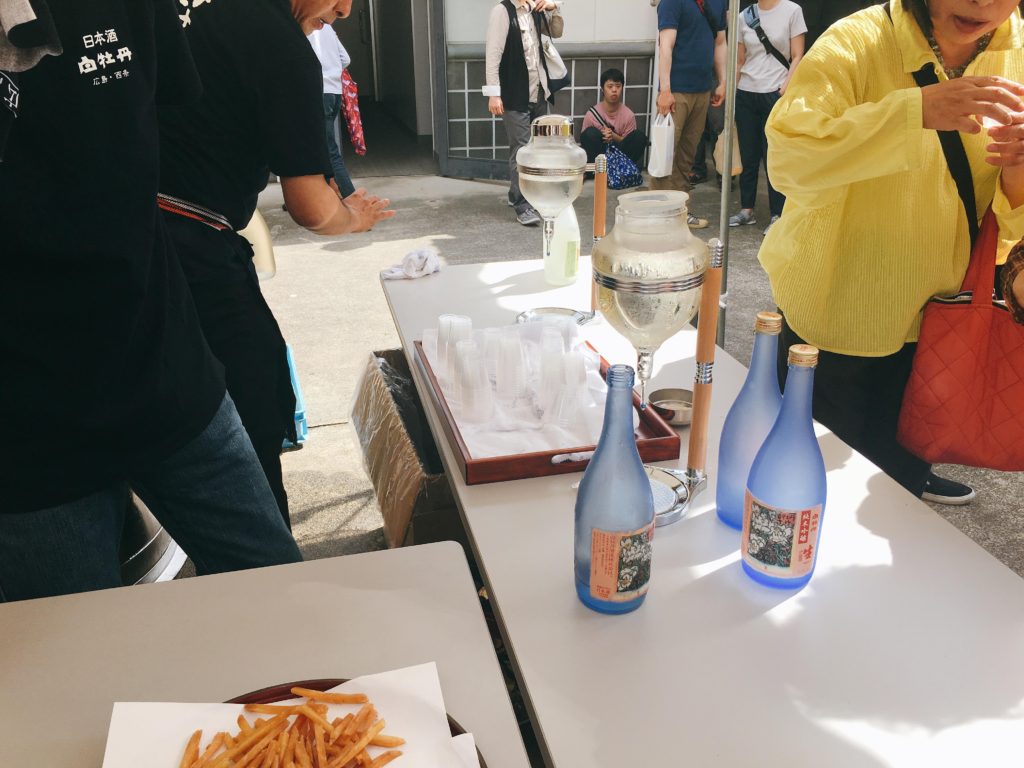 They also opened the Sake Festival-only restaurant and ramen house. 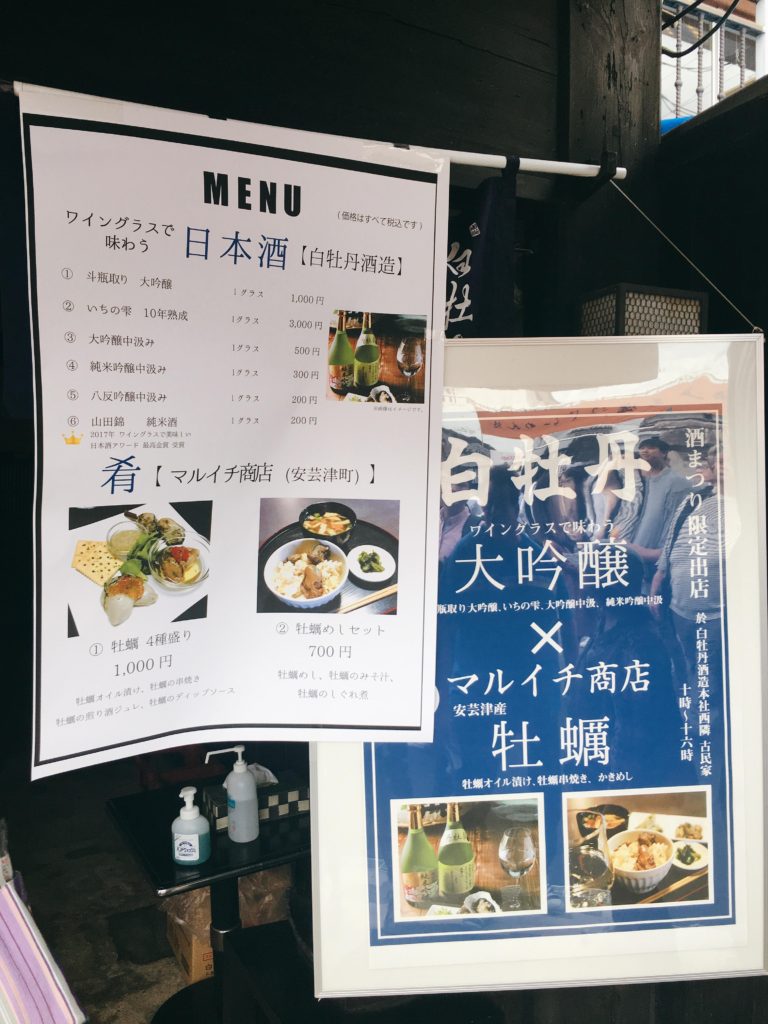 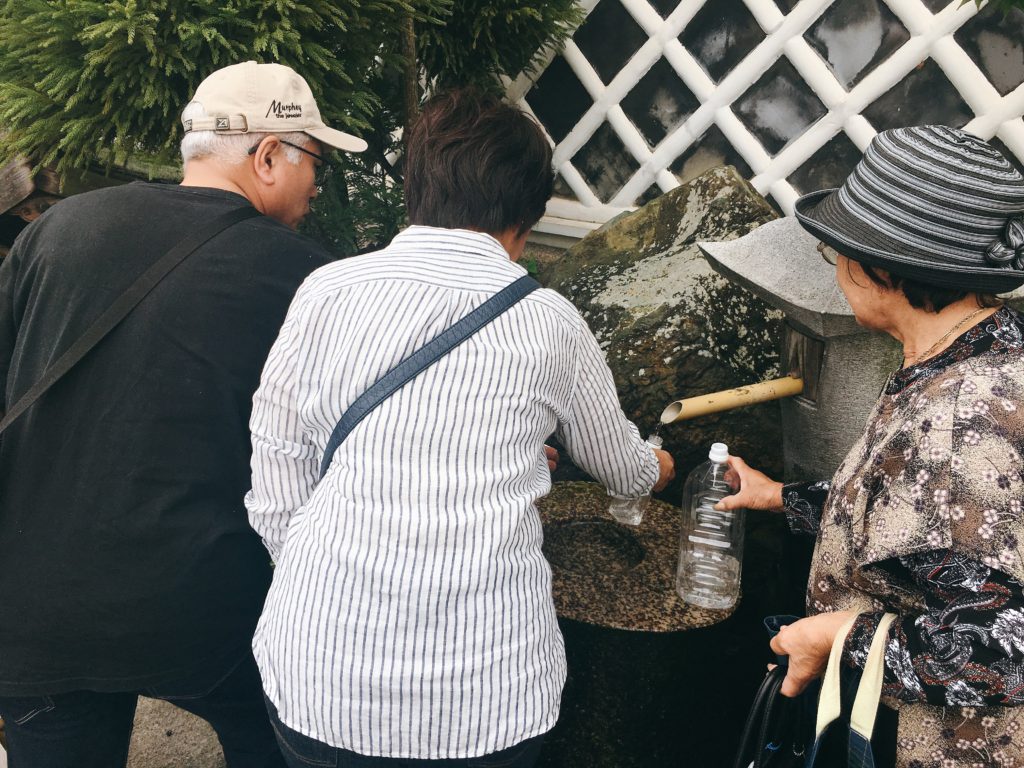 ■Other Than Breweries, You Can Also Enjoy Street Sake

On a route to Fukubijin Brewery, I dropped by the spot where you can enjoy sake tasting. I tried 3 types of local sake (500 yen for 3 cups) as follows: 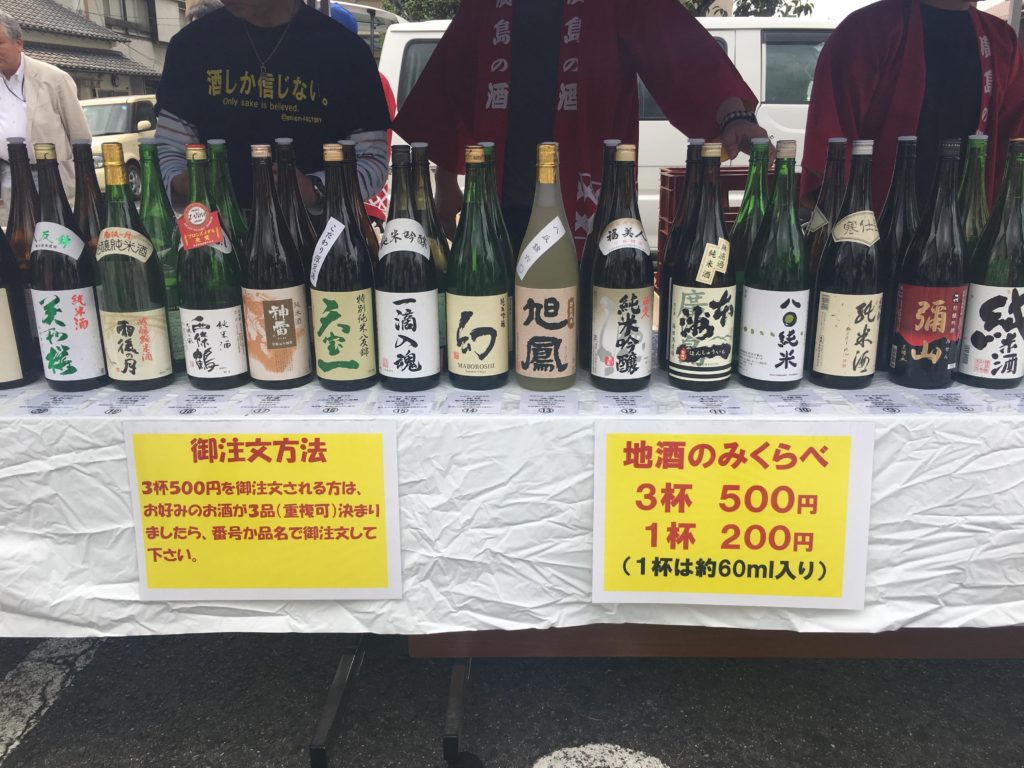 The above three sake are all made in Hiroshima, but this was the first time that I’d tried Fukucho and Oigame.

At this time period, I was getting a bit tipsy. 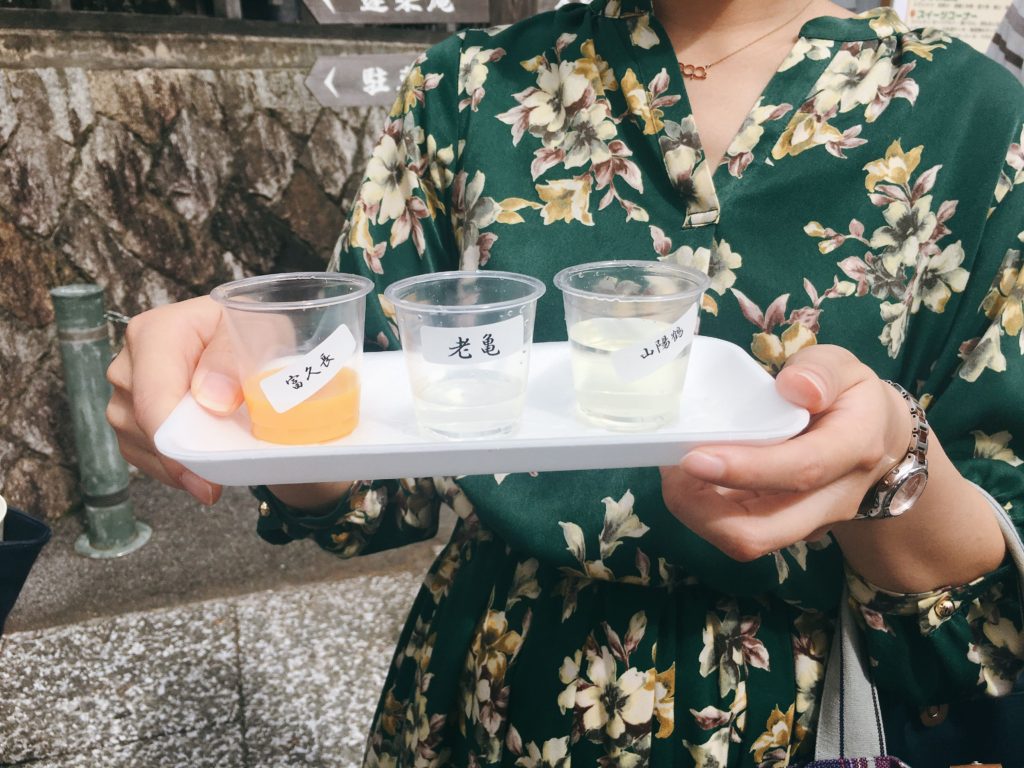 After a few minutes’ walk, I arrived at Fukubijin Brewery.

I tried amazeke made of sake lees (300 JPY) here. This amazeke contains only a bit of alcohol.

At Fukubijin Brewery, the handwriting POP display and materials drew my attention. 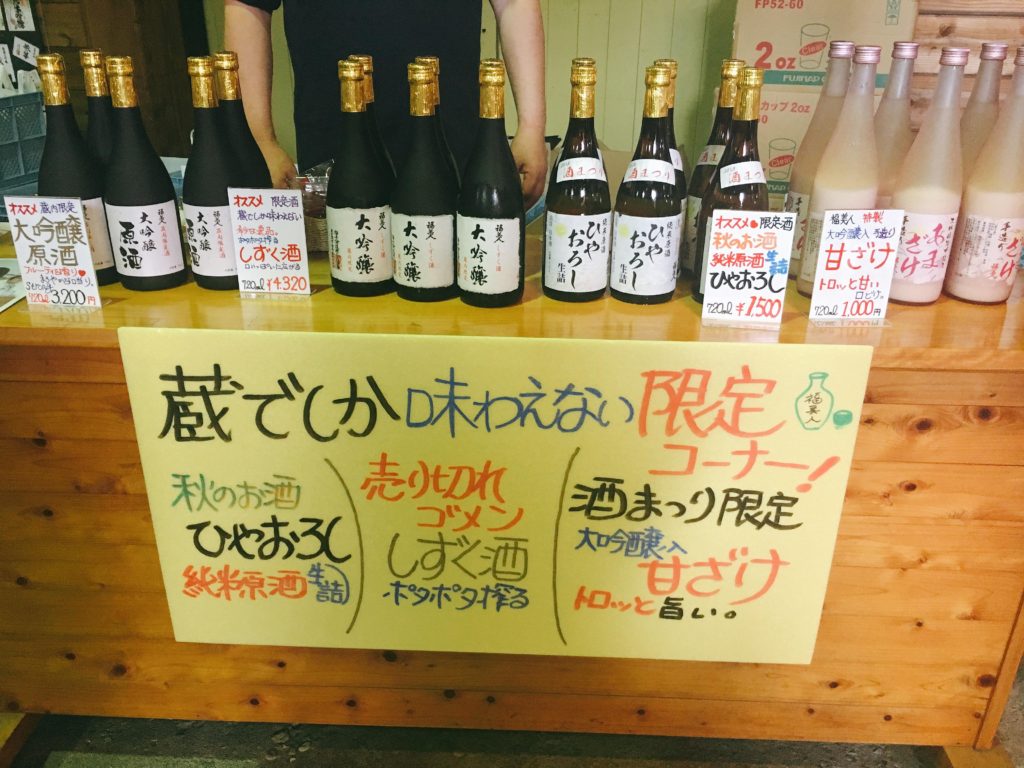 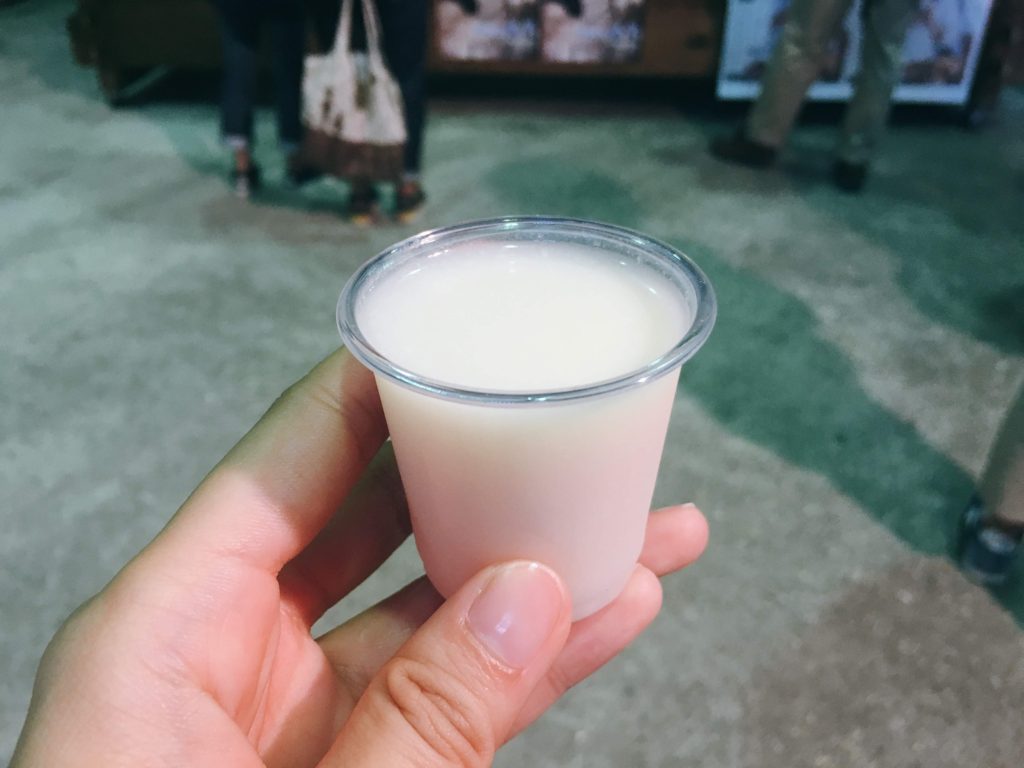 The last was Kirei Brewery.

I was very impressed by its dry and crispy flavored sake.

The paid taskings was 200 yen per cup. Since their sake was limited to the Sake Festival, many people were buying them by bottle. 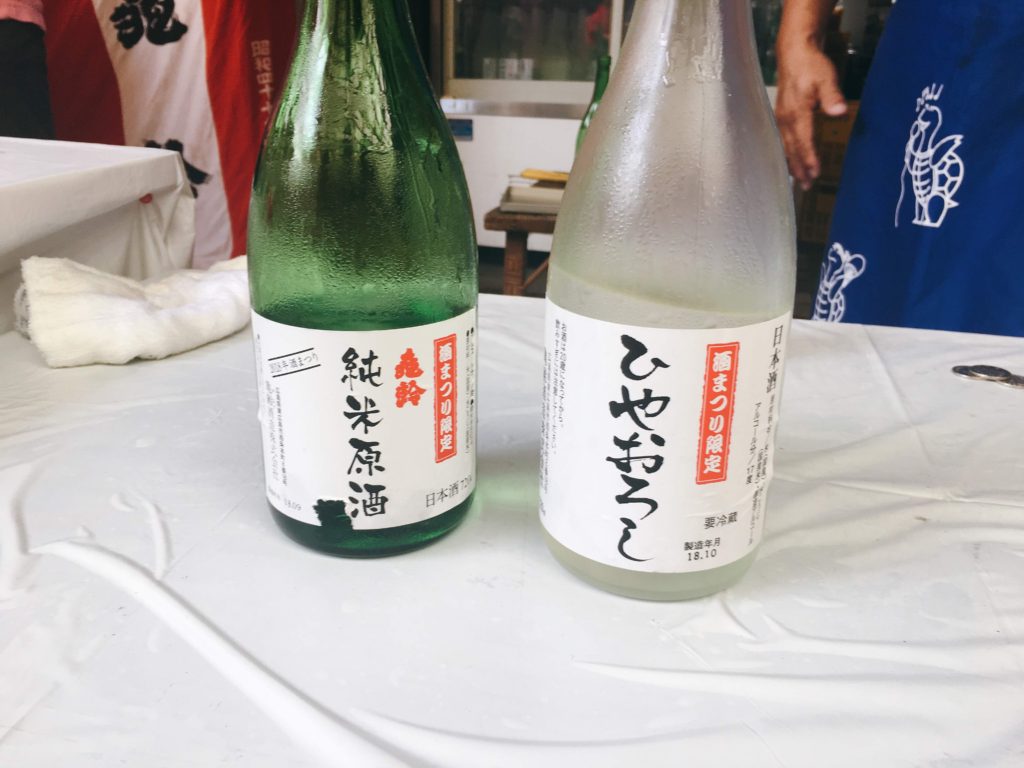 It was noon at this point and the festival was crowded with many people. I saw a lot of people lined up here and there, and some of the products were sold out already.

Tips to enjoy the Sake Festival #3
You won’t stand out in red clothes
About 120,000 people attend this event per day (as of 2018). The number of visitors is increasing year by year.
Since the Hiroshima Toyo Carp (the professional baseball team of Hiroshima) had won the Central League Pennant in 2018 again, Saijo town was very lively and full of excitement.
Some of the people were wearing red clothes to stand out not to get lost, but since the Carp’s team color is red and there were so many people in red cloths, it would have been smarter to avoid red if they had wanted to stand out in a crowd.

It was time to come back to Sanyo Tsuru and enjoy Bisho Nabe.

Bisho Nabe is a specialty of Higashi-Hiroshima City. Its unique feature is that you cook pork, chicken gizzard, scallops, clam, fish and vegetables only with sake, salt and peppers (around 2,000 to 3,000yen). At Sanyo Tsuru, it also came with 180ml of sake.Extract of pork and seafood made rich soup was a great match with sake. We finished off the nabe with ramen. The alcohol evaporated as it cooked, so I didn’t really feel the strong smell of alcohol. 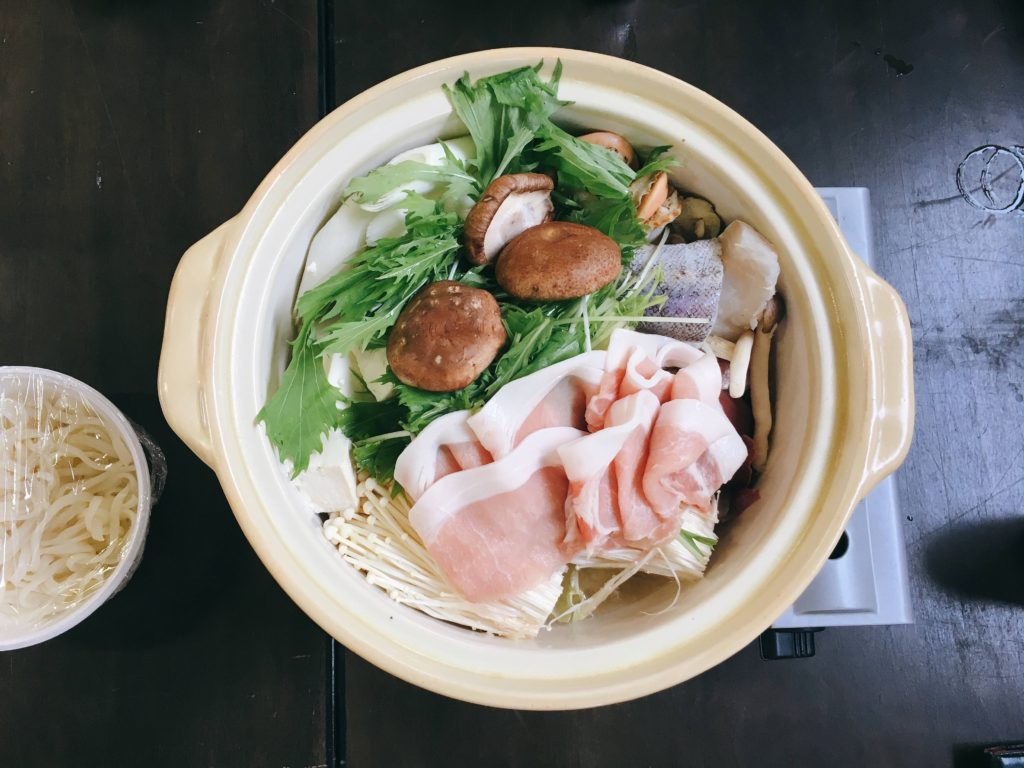 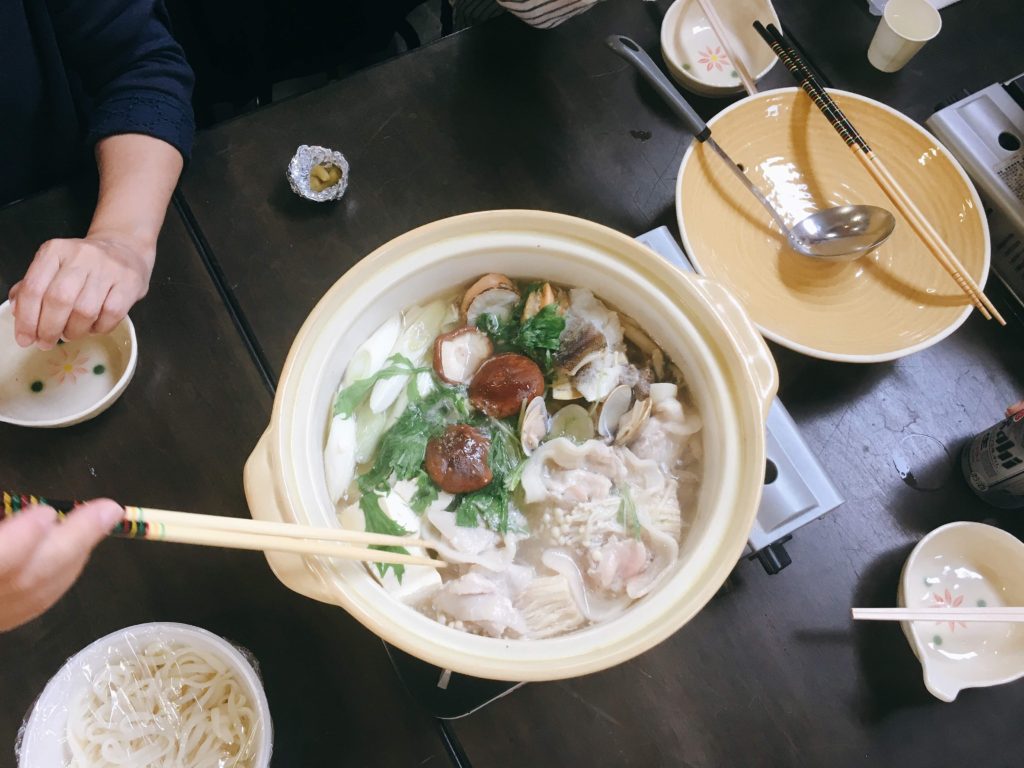 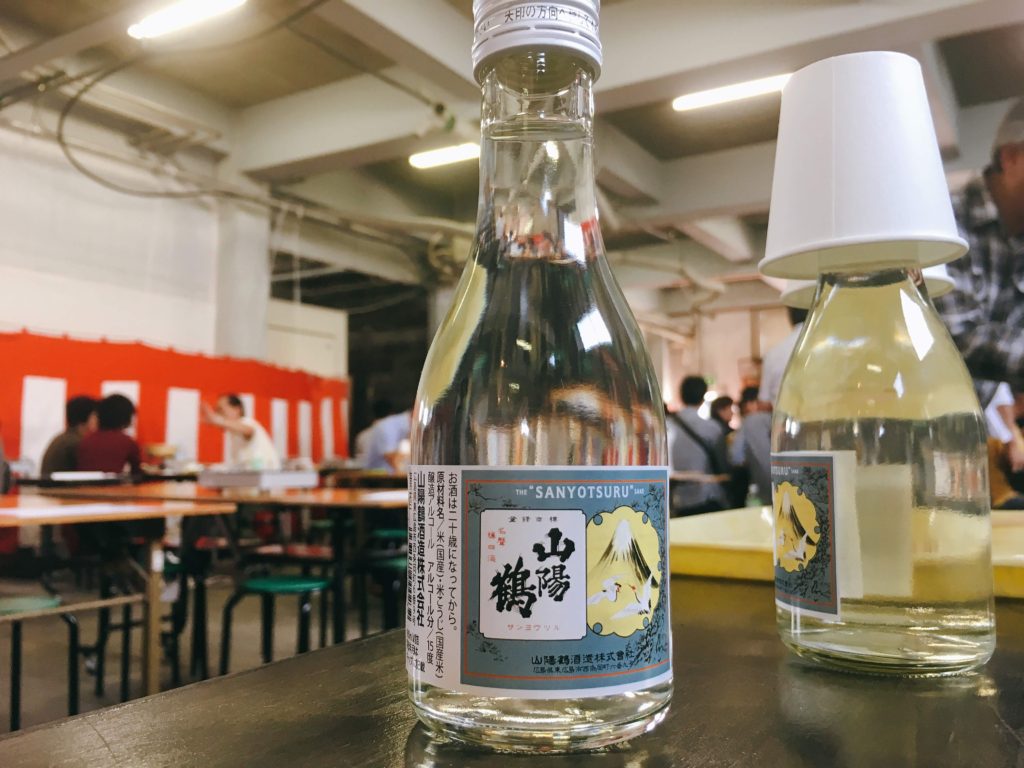 I recommend you to visit there by 11:00 to avoid the crowds. It feels luxurious to fill up on wonderful sake in the morning.

You can buy any of sake that you liked there, and some of the breweries even provide delivery service on the spot, so visitors from afar can also enjoy the festival without worry.

The area around JR Saijo Station is lined with many sake breweries, where you can learn more about sake and enjoy plenty of sake. If you are a sake enthusiast, you’d better to keep 2nd weekend of October open to join the Sake Festival, an event that condenses all the charms of the town.

■ Lastly, For Those Who Want To Step Into The Sake World More

Tips to enjoy the Sake Festival #4
There is The National Research Institute of Brewing, which researches alcoholic beverages in Higashi-Hiroshima City.
In “Higashi-Hiroshima Arts & Culture Hall Kurara”, which is very close to the venue of the Sake Festival, the National Research Institute of Brewing opens a booth and provides a precious opportunity to study about ingredient for sake. Since the guides are all well-versed in technical knowledge, this place comes highly recommended if you are interested in extending your knowledge about sake. 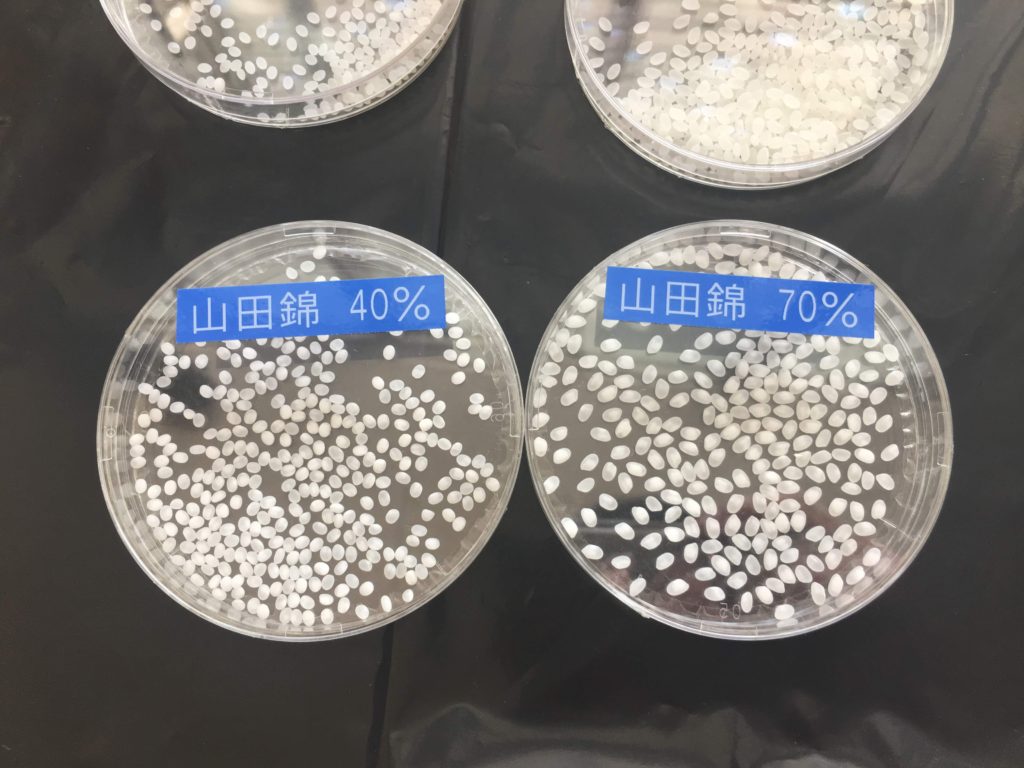 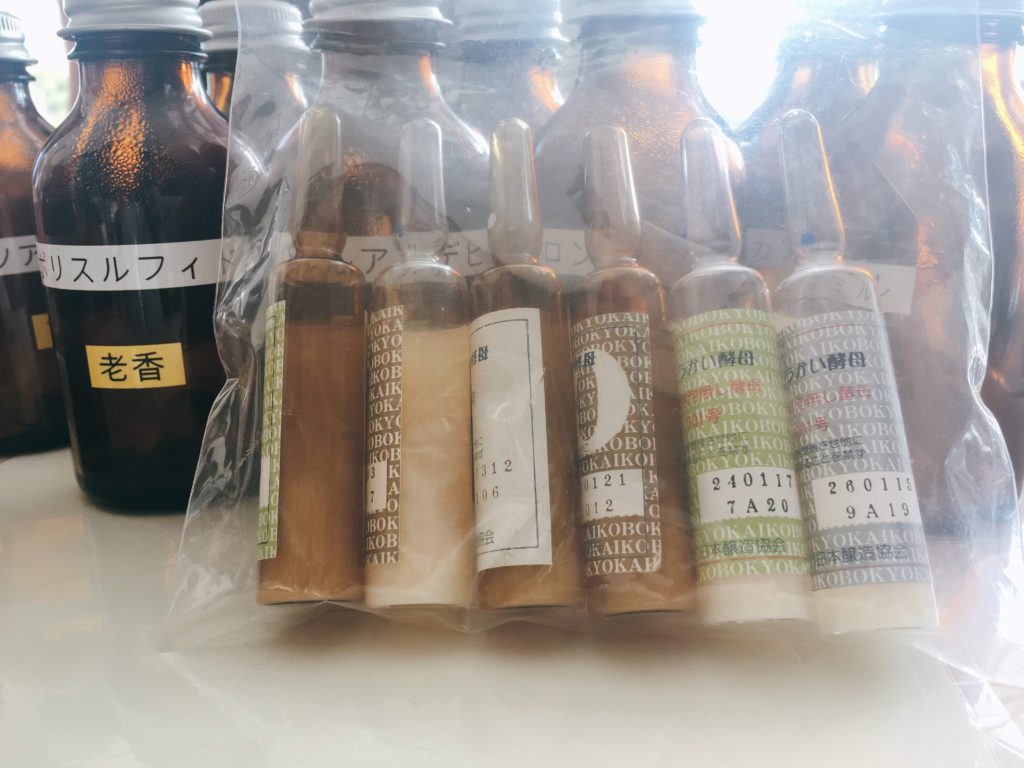