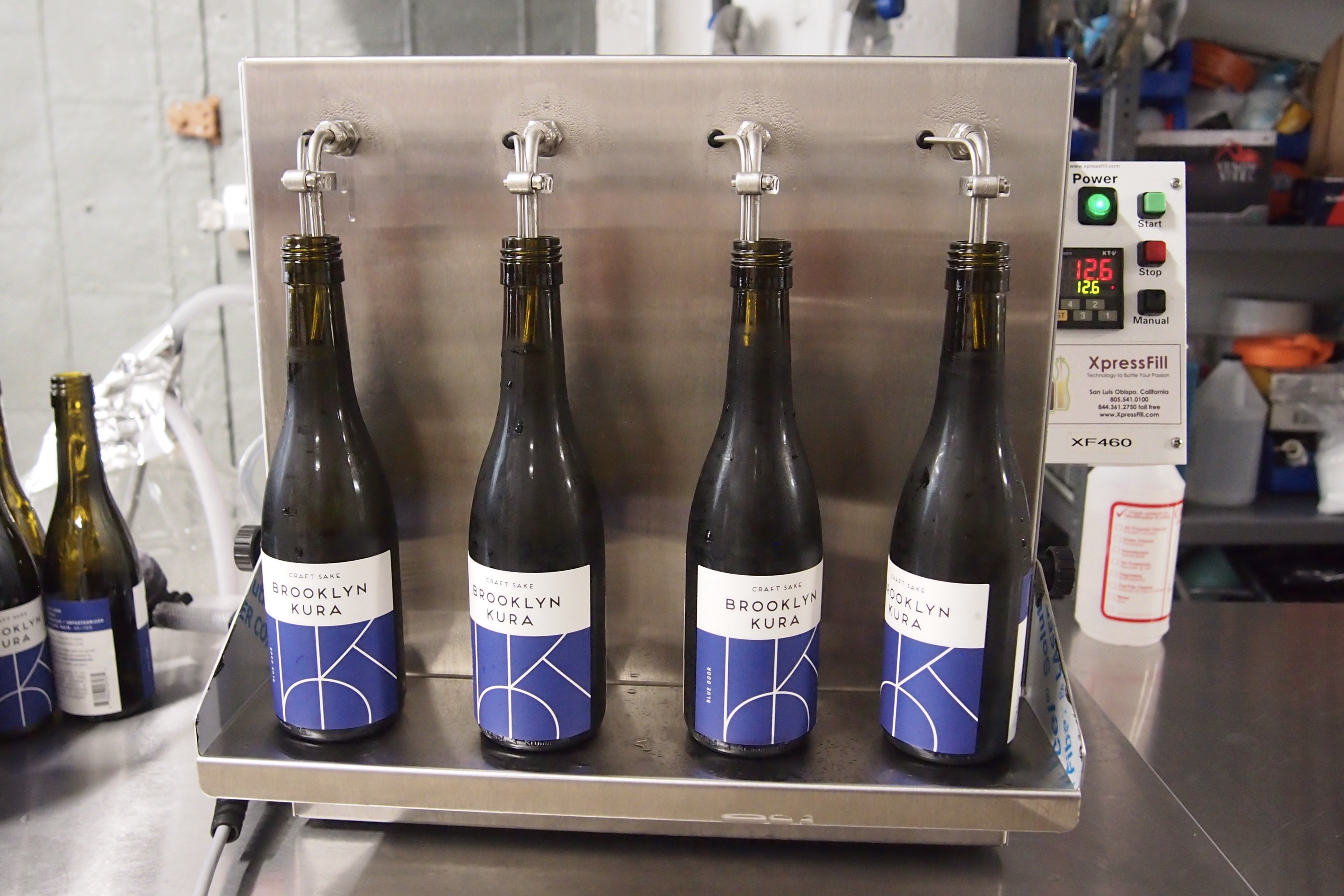 Arriving at John F Kennedy International Airport, I made sure that there were no new messages in my email box, and redialed an unrecognised number in the call history. The man who received my call, soon after I gave my name, apologized that he had finally decided not to accept my interview;

for two weeks I’d been waiting for an answer, but they were trying to reduce the number of interviews due to time pressure. Though his answer was what I expected, I hung on to him as I saw a rare opportunity.

Can I stop by just to buy your sake because I’ve already arrived in New York?
What – Aren’t you in San Francisco? Well, OK, then we can do that. What time are you available?

After a short conversation, I got an appointment to interview them. I hung up the phone and saw reddish buildings through the Uber’s window – I was thinking that, “This is New York.”

Located in Industry City, the Epicenter of Fashion in NYC 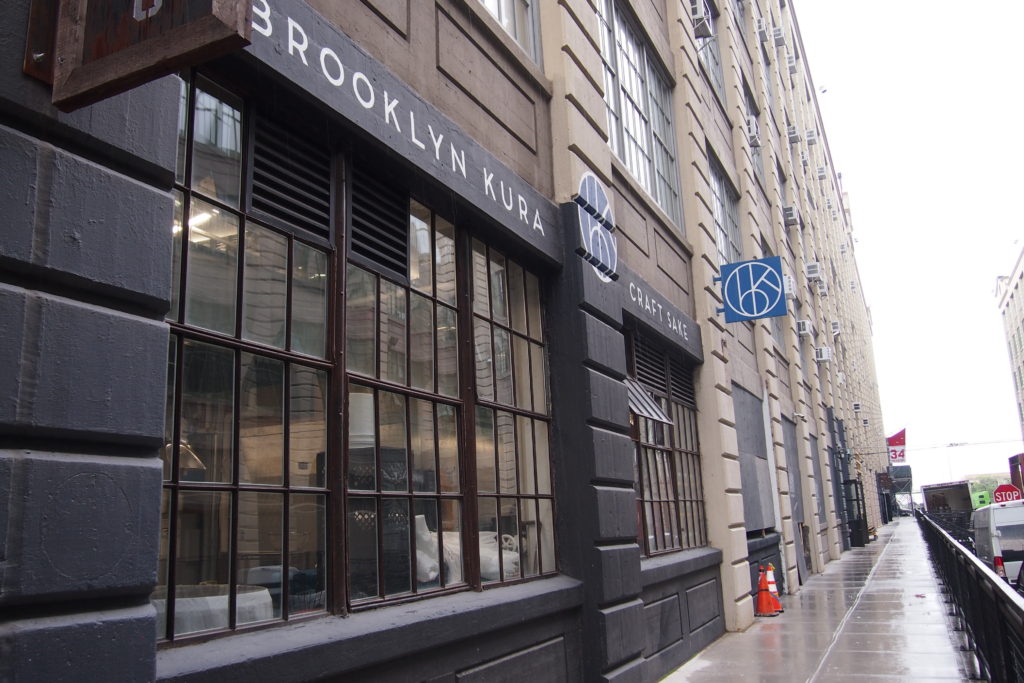 Eight tall buildings stand with their back to Gowanus Bay leading up to Upper New York Bay. While it looks like an industrial district, as you set foot in there, you can see art galleries, food markets and trendy shops.
Here lies Industry City, which has been attracting a great deal of attention from fashion-conscious young people in Brooklyn. Brooklyn Kura, the first sake brewery in New York City, is located in this commercial complex transferred from historical warehouses and factories.

“This location changes every week. Sometimes for the better and sometimes for the worse since they’re trying new concepts, launching new businesses or attracting new people.”

Brian Polen, one of the co-founders of Brooklyn Kura and the person I spoke to over the phone, mentions its location.

“This location can be challenging. But pretty much all the people who come to industry city come to visit us, so it’s great.”

In 2013, Brian and another co-founder met at a mutual friend’s wedding in Tokyo and hit it off as sake fans. After learning their trade at some sake breweries in Japan, they opened Brooklyn Kura in January 2018.

Brandon, who used to work as a biochemist in Portland, is leading their brewing while Brian, who was a technical analyst for American Express, is in charge of their business management.

“Brandon is meticulously focused on quality and the product which is essential to make high quality sake,” Brian says. “I have a broad kind of business and operational experience and have led teams and organizations for quite some time, which is helpful for this project.”

What Makes Their Taproom A Success 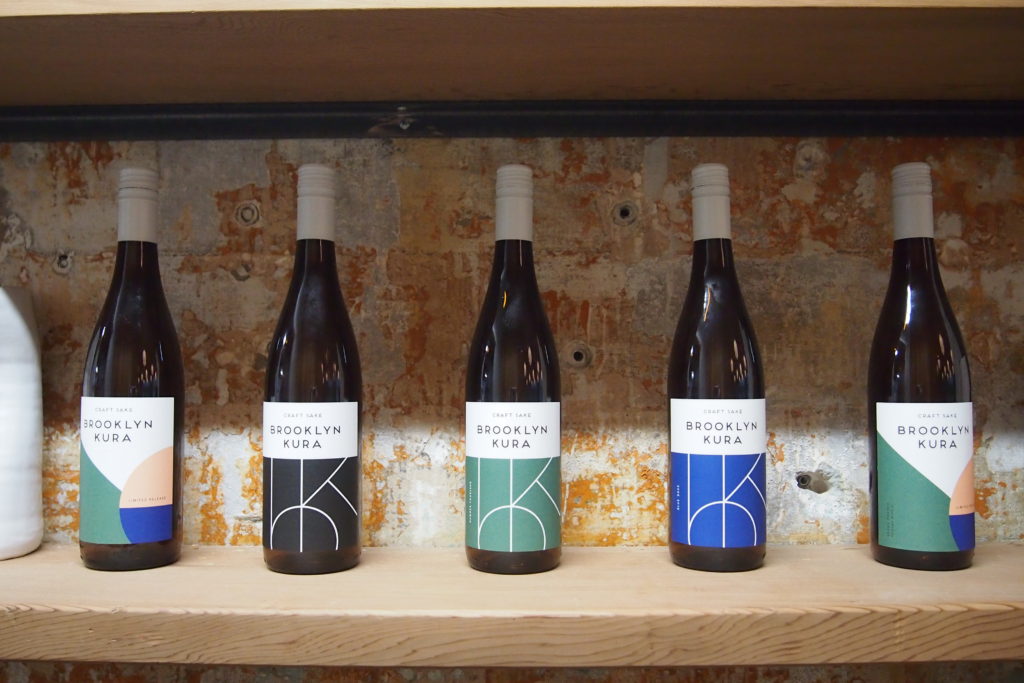 You can identify Brian’s acumen everywhere in their sake business. When you visit their brewery built on a plot of the cutting-edge Industry City, you are surprised by the spacious room. As you open the blue door and step inside, you see a stylish taproom. The space, which looks like a fashionable bar rather than a corner of a brewery, is designed by local design studio Carpenter + Mason.

“We are a little larger than any of the craft breweries. That’s primarily because it’s very difficult to justify the amount of investment that you need to build a sake brewery unless you’re able to produce a certain amount of sake. So the business in my mind didn’t make sense unless we had a certain capacity,” explains Brian.

This taproom accounts for 40% of their revenue. It opens on weekends, from Friday to Sunday, and is often used as a venue for events.At restaurants and liquor stores, you can get only two or three products including their signature products #14, Blue Door and limited editions. On the other hand, you can try seven to eight kinds of sake including things only available at the taproom. 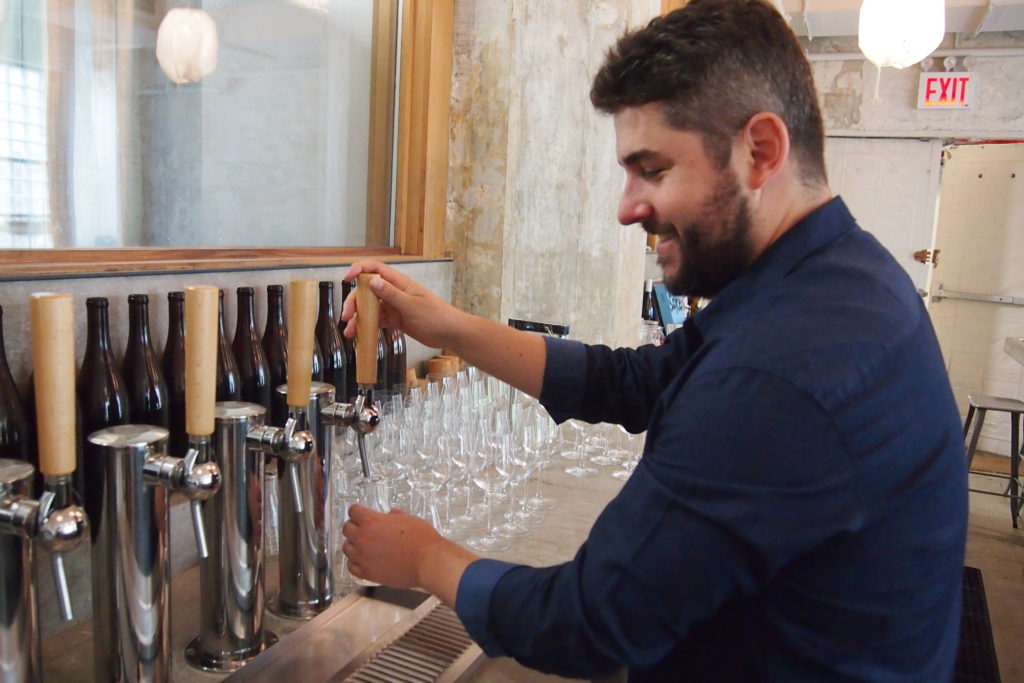 Shiboritate #14, freshly pressed sake of the signature product #14, refreshes you with clear and bright flavor. Lake Suwa, made with yeast from Nagano prefecture in Japan, has an elegant aroma and rich flavor.

Also, on the day I visited for the interview (June 2019), the toji (brewmaster) Junji Matsumori and the director of the manufacturing department Satoshi Tamakawa from Nanbu Bijin (Iwate Pref., Japan) made a daiginjo sake with Brandon as their first collaboration project.

“People in beer and wine are used to a variety and so they want to see a range. We have to build interest and excitement,” Brian says.

They pour sake in a wine glass with a draft system generally used for beer. It is unique that they use Erlenmeyer flasks instead of tokkuri, a traditional carafe for serving sake.

“In a more casual way serving it in wine glasses, making it something that American consumers can interact with more easily, is having an impact. I mean, I would like the industry to grow faster.”

You can see silver tanks in the brewing room behind the draft systems. 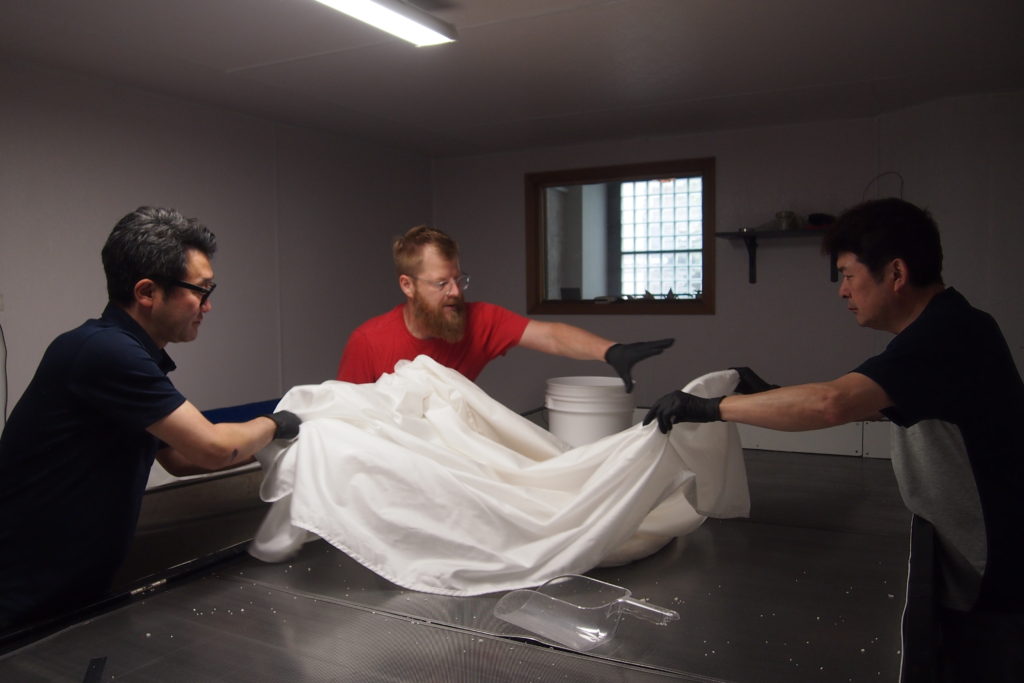 At the taproom, you can try not only traditional style sake but also unique products such as Citrix, a sour sake made with white koji, the mold generally used for shochu, or Occidental, which has hoppy flavor like beer (As of June 2019).

“We want to prove that we’re able to make a beautiful traditional style of sake and gain the respect and support of the Japanese sake community,” Brian says. “But at the same time, we are in the U.S. and our consumers have different preferences, they’re looking for exciting new things.”

As wholesale, their market has spread to New York, New Jersey, Pennsylvania and other states. However, it takes time because there are a lot of retailers that can’t guarantee cold storage for their nama (unpasteurized) products.

“It’s been a slow build process. I’d like to move faster, but it is moving at a reasonable speed.”

“I think a lot of younger generations are more interested in sake because Brooklyn Kura is here now,” says Jessica Joly, known as Miss Sake USA and the marketing director for Sake Discoveries, a branding company owned by a sake sommelier Chizuko-Niikawa Helton; Brooklyn Kura tries to establish a close relationship with Japanese sake communities such as these.

“Brooklyn is always trendy, right? New Millennials (Defined as the generation born between 1981 and 1996) look like could have been the hottest top somewhere. So you see not the general sake movers but new people going on this sake.”

Strength Never to Compete with Others 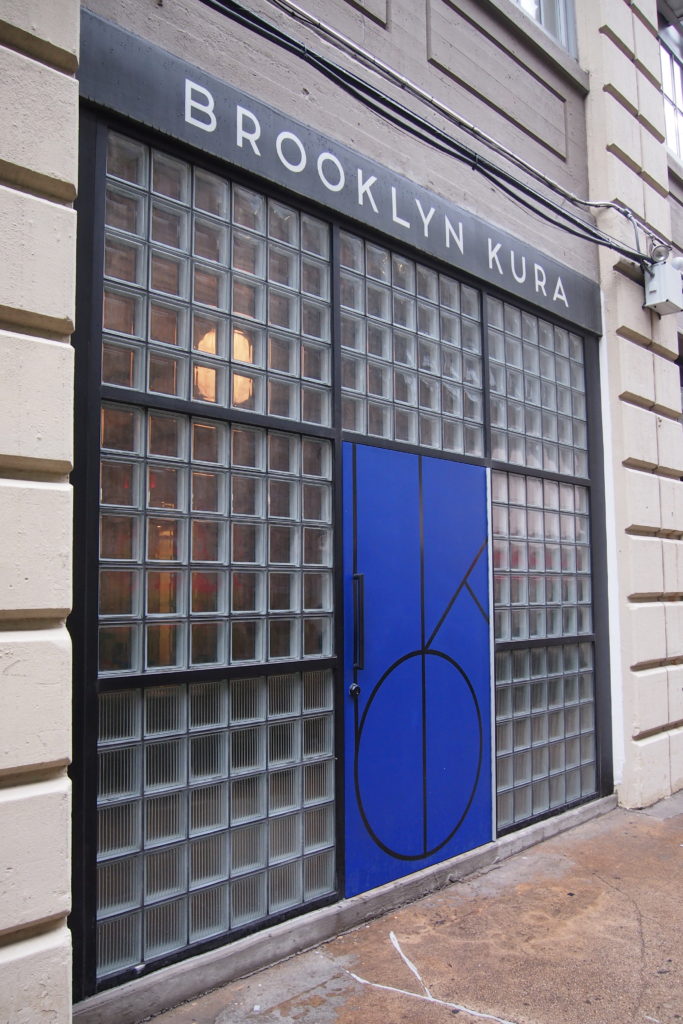 “Like Sequoia (California), the folks in Colorado (Colorado Sake Co.), in Charlottesville (North American Sake Brewery, Versinia), and Ben’s Tune Up in Asheville (North Carolina) – I mean there’s a large number of people like trying to make sake. Something exciting for American consumers hopefully has a large impact.”

As Brian talks, in the recent US, local sake breweries have been born one after another and sake imports from Japan have increased year by year. To my question “Compared to other US breweries, what do you think your strong point is?”, Brian asserts “I try not to compare ourselves to other U.S. breweries.”

“We try and be as helpful as possible to other brewers because ultimately we just want them to make a delicious thing that helps sake in the simple stuff. We’re just trying to be successful, which is difficult and time-consuming. And if we can do that, hopefully other breweries can be successful and then overall improve sake.”

There is a lot of competition in the Japan’s sake industry, nevertheless Brooklyn Kura has the ideal attitude. “I understand why they do it because they’re trying to maintain their control over a very small share over a smaller pie,” Brian says. “It serves no purpose for us to compete and to compare.”

Regarding imported sake from Japan, Brian insists that “We just want them (importers) to send better and better sake here and it’s become more and more affordable, which makes my job harder.” In 2020, the worldwide popular sake brand Dassai is going to start their brewing in New York. Brooklyn Kura welcomes the American sake market getting more intense and diverse.

Such a business perspective leads that they are trying to make a wide variety of sake and serve them in their taproom.