Den Sake Brewery – Why A Musician Brews Sake In Oakland? 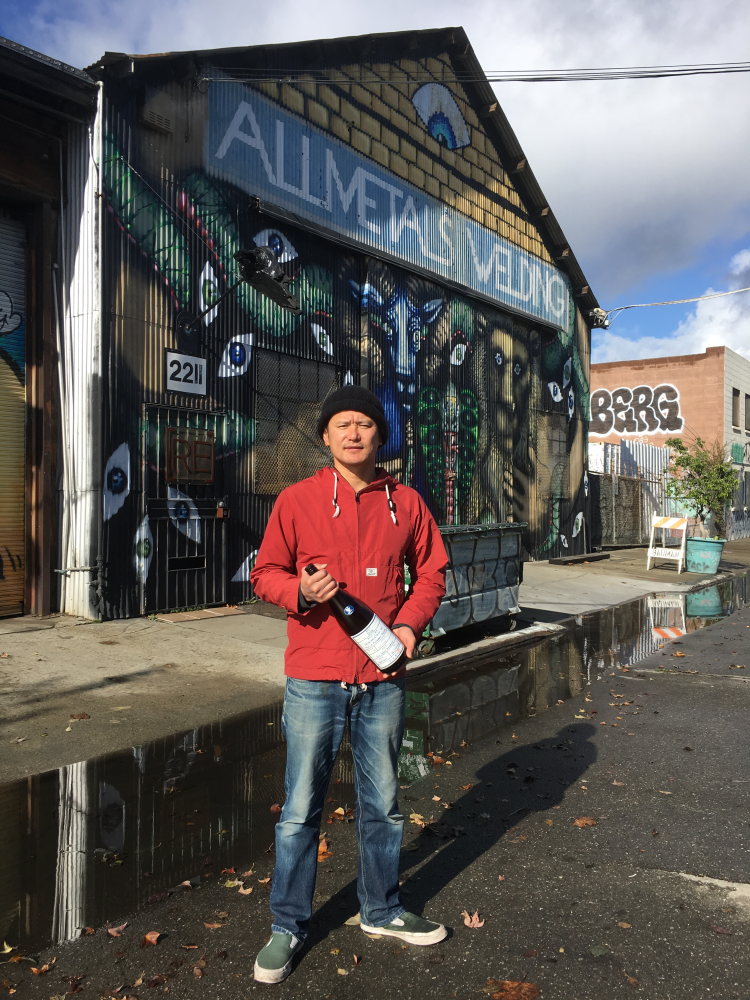 After the rain, the street was littered with junk. The walls of buildings along asphalt roads are covered in richly colored graffiti. Due to the strange site for a sake brewery, I could not, with confidence, say “yes”to the Uber driver’s question: “Your destination is here?”

Den Sake Brewery is in a corner of O2 Artisans Aggregate (O2AA), an eco industrial park which is also home to popular soba restaurant Soba Ichi.

Passing under a wooden sign Akinaichu (open) suspended above a steel door, I realized that inside of the brewery is quite small.  Behind a desk by the entrance, there is a tall DIY koshiki (a tub traditionally used to steam rice) and a small washstand. An acoustic guitar looks down on visitors  from a loft on a koji (malted rice) room. 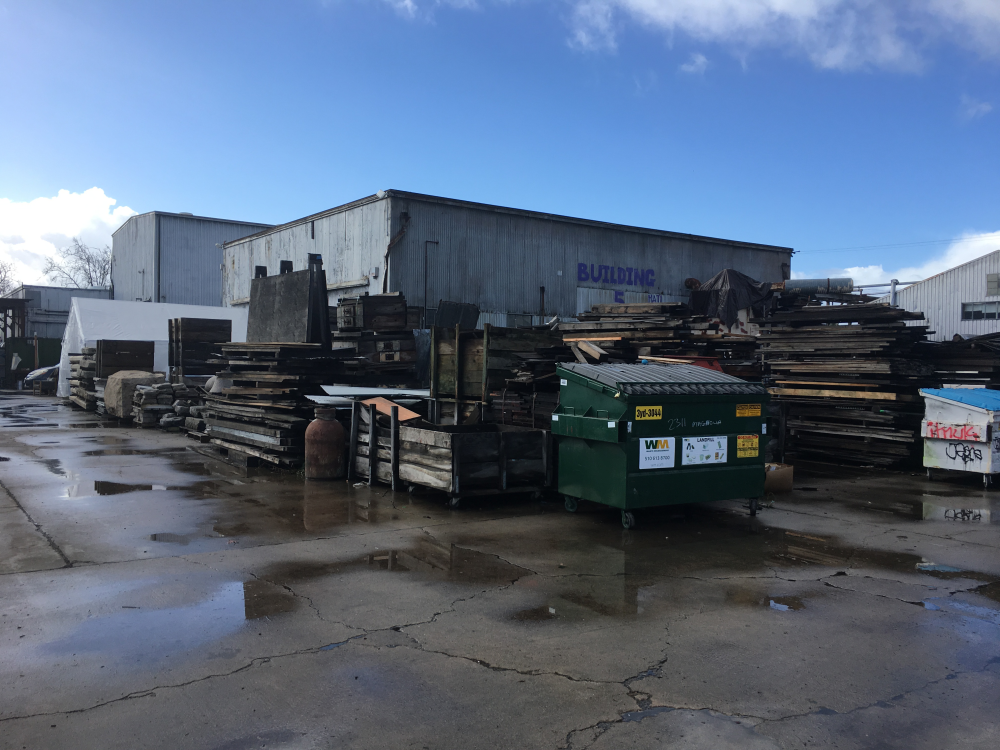 “18 years have passed since I came here; I was just going to attend a language school for three months at first.”

Brewer Yoshi Sako, who established Den Sake Brewery,  came to the US from Japan in 2000. He attended a language school where an encounter with a teacher who plays the drums inspired him to rekindle his band activity that he abandoned back in Japan. He now plays the bass for three bands: Beatropolis, a live-electronic band which collaborates with a Japanese Hip Hop MC Shingo2; Glider, a rock band launched as a side project by members of Counting Crows; and a world music band (S)ynchrosystem.

At the same time, Yoshi reached a turning point in his second job for a cafe. While working as a manager and buyer for sake and wine store Corkage (closed), he found himself strongly drawn to sake. Five years later, he started working for  Japanese restaurant Yuzuki Japanese Eatery as a sake sommelier and started giving  sake lectures to his customers.

“Experiences such as training at Kubota Shuzo (Kanagawa) and Shiokawa Sake Brewery (Niigata) in Japan and teaching sake to general customers made me think ‘How can I understand sake more deeply?’ Then I came up with the idea that I should brew my own sake.”

To understand sake more and more deeply, in 2015 Yoshi started a brewing trial. He built a walk-in cooler to use as a fermentation chamber and pitched two-ply tents as a koji room. He became addicted to the  depth and process of sake brewing and, realizing this was too much to do just in his spare time, he decided to establish his own brewery. 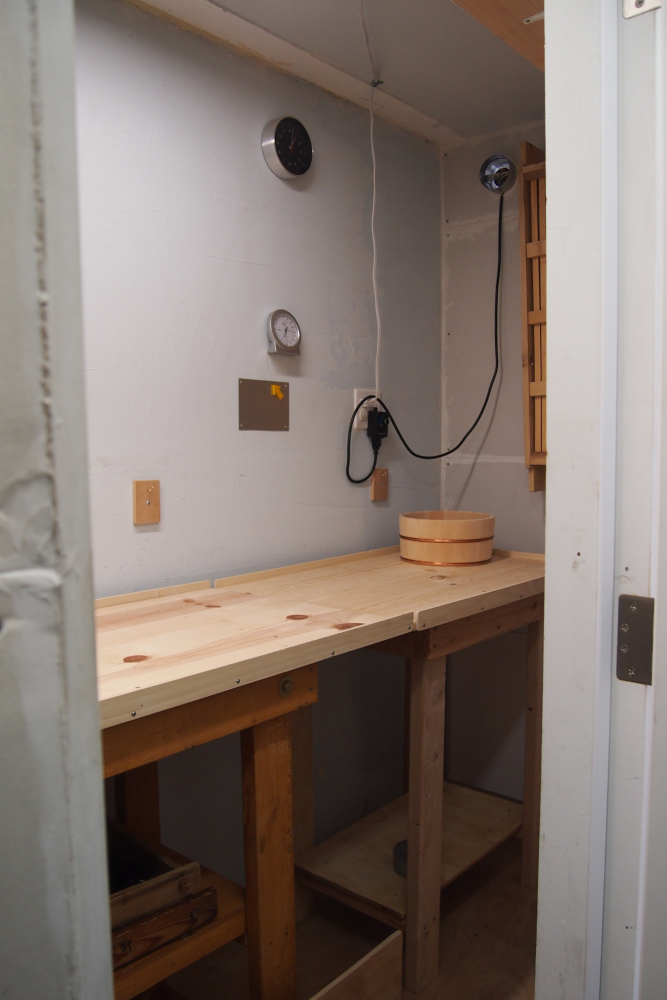 At first, Yoshi considered opening his brewery in San Francisco. However, he eventually chose Oakland; the costs and competition in San Francisco were prohibitive, and he likes the character of Oakland.

“Oakland is diverse – it has a large population of black people. There is a climate that various races of people help each other equally, regarding their community as important. They are strongly proud of ‘local.’”

Compared with San Francisco, where the number of enthusiasts has been increasing, sake has been still unfamiliar to people in Oakland. “Such people can be more open-minded about untraditional sake,” Yoshi says.

The first hurdle for starting his brewery was equipment. Because there is no manufacturer that produces equipment for sake-brewing in the US, Yoshi had to choose one of two options; import specialized materials  from Japan, or make adjustments to existing equipment for wine or beer. The costs of the former were very high, so he decided to make use of what was already available here. However, it was time-consuming to research the materials of the equipment to make sure they’re harmless to brew sake. 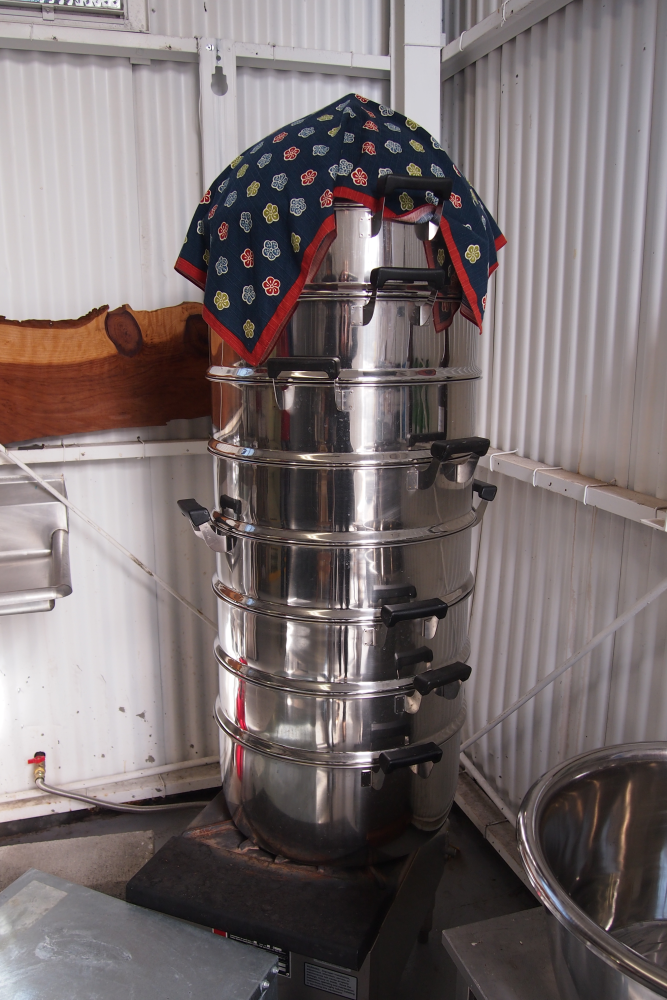 “I got the largest steamers for koshiki. I put silicon rubber between pans to prevent steam leakage, but there should be still room for improvement.”

Everything – including the “cute” koji room where he can make at most 36 kilograms of steamed rice (Link to Instagram) and press machine – is made by Yoshi’s own hand (Link to Instagram). A release device of limiter allowed him to lower the temperature in the press room to 4℃ (39.2℉). 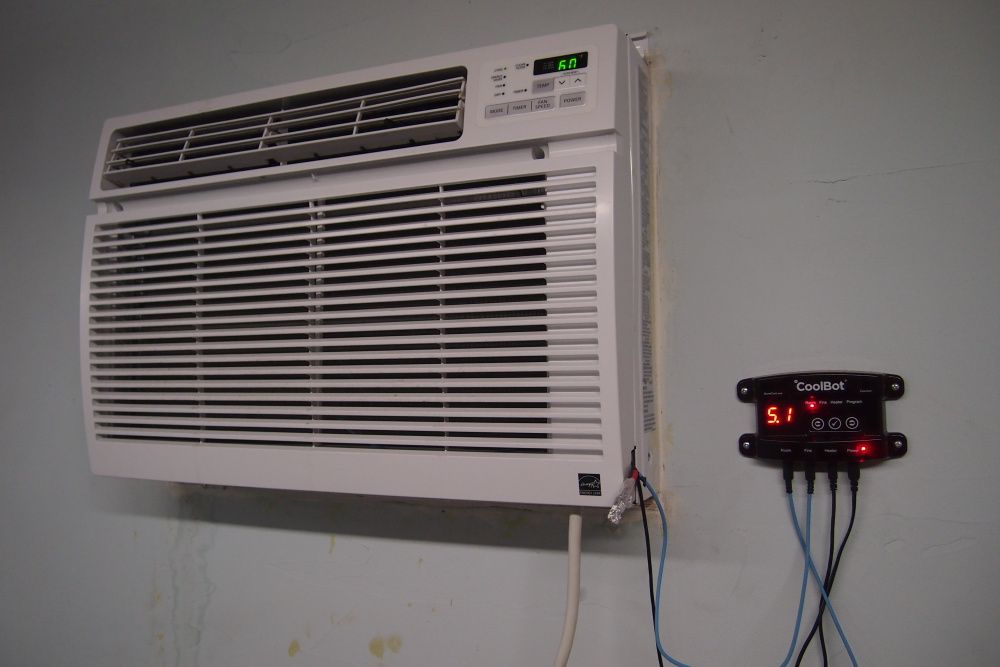 “Den” means “rice field” in Japanese. As its name suggests, Den Sake Brewery uses special rice: their material rice is “Calhikari,” short grain sushi rice grown by Rue + Forsman Ranch in Sacramento Valley. In order to retain its original flavor, Yoshi set the seimaibuai (polished ratio) as 70 (30% of the original grain has been polished away). This ratio can be categorized as neither “ginjo (under 60)” nor “daiginjo (under 50),” which tend to be regarded as premium sake.

“The sake with the strong first impression has an advantage to trick people into buying it. My goal is, however, brewing sake that people can keep drinking with the flavor that they never get tired of,” Yoshi says. “A while ago, one of my friends kept drinking my sake until he got hammered. I was content that he liked it sincerely – I would have regarded he just tries to be diplomatic if he had drunk only a few glasses though.”

Yoshi’s background as a manager for a wine and sake store and a sommelier in California, home to a large number of wine drinkers, has meant his sake brewing is strongly influenced by wine culture.

“Wine has progressed historically and academically: for example, a theory that ‘red wine goes well with meat’ can be proved by a scientific basis that combining tannin in red wine with protein creates soft flavor in your mouth,” Yoshi says. “Sake had not progressed in the same way. Though you could read such information on industrial journals, general people have no opportunity to get it. If someone erect and spread the theory of sake, the number of sake drinkers would catch up that of wine.”

According to Yoshi, the core of wine is acidity, while that of sake is umami (amino acid).

“When I ask wine drinkers to have sake, they often say ‘it has little acidity.’ I want them to feel umami instead of acidity, but their tongues are unconsciously used to eating food with wine’s acidity. I try to extract acidity at my brewing so that such people can naturally feel tasty.”

One of the reasons US people need acidity is it works to cleanse their palate for American cuisine with high protein and fat. Yoshi found that most sake made in other US breweries tend to have strong acidity.

“Not only acidity, but also various taste components appear too much actually  – sometimes unbalanced. I try to make my sake ‘clean,’ raising acidity and minimizing other tastes.”

Previously, Den Sake Brewery had brewed only nama (unpasteurized) sake. At our meeting (December 1, 2018), however, Yoshi let me taste the hi-ire (pasteurized) sake he has just started producing. 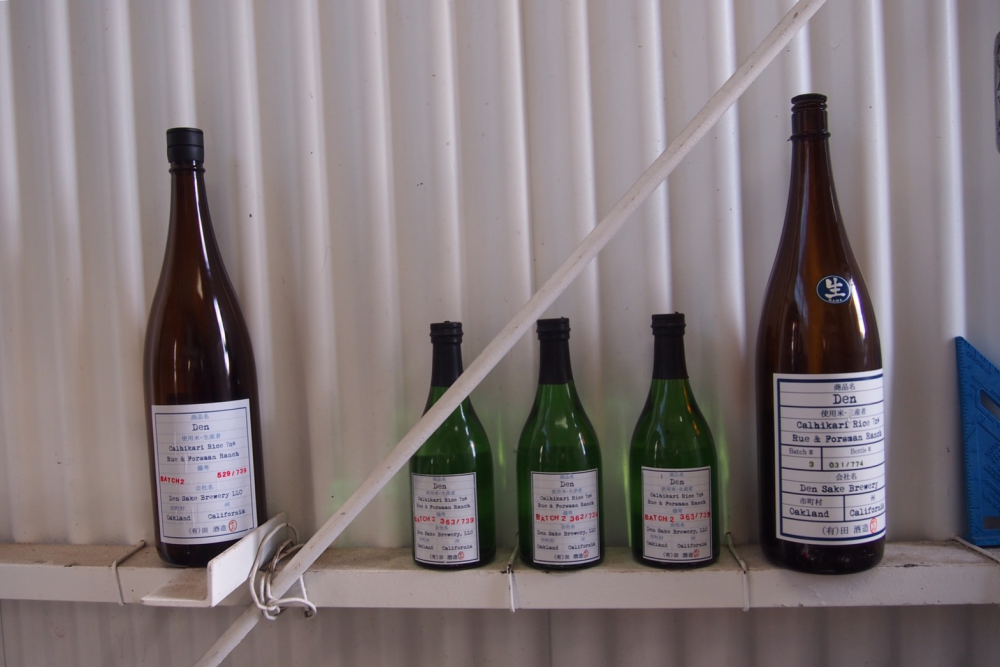 While Yoshi described the flavor of nama sake as ‘flashy,’ hi-ire is palatable, silky with a refreshing aftertaste. The flavor combination was indeed ricey and ‘clean’ as he explained.

He pasteurizes sake by putting bottles into hot water at 70℃ (158℉). Although he would like to produce hi-ire constantly because “Nama easily gets heavier with time,” it requires too much work for one brewer.

“Actually, I am interested in making ginjo in future. Also, I want to try yamahai (a traditional brewing method) because it’s a sake of acidity.” 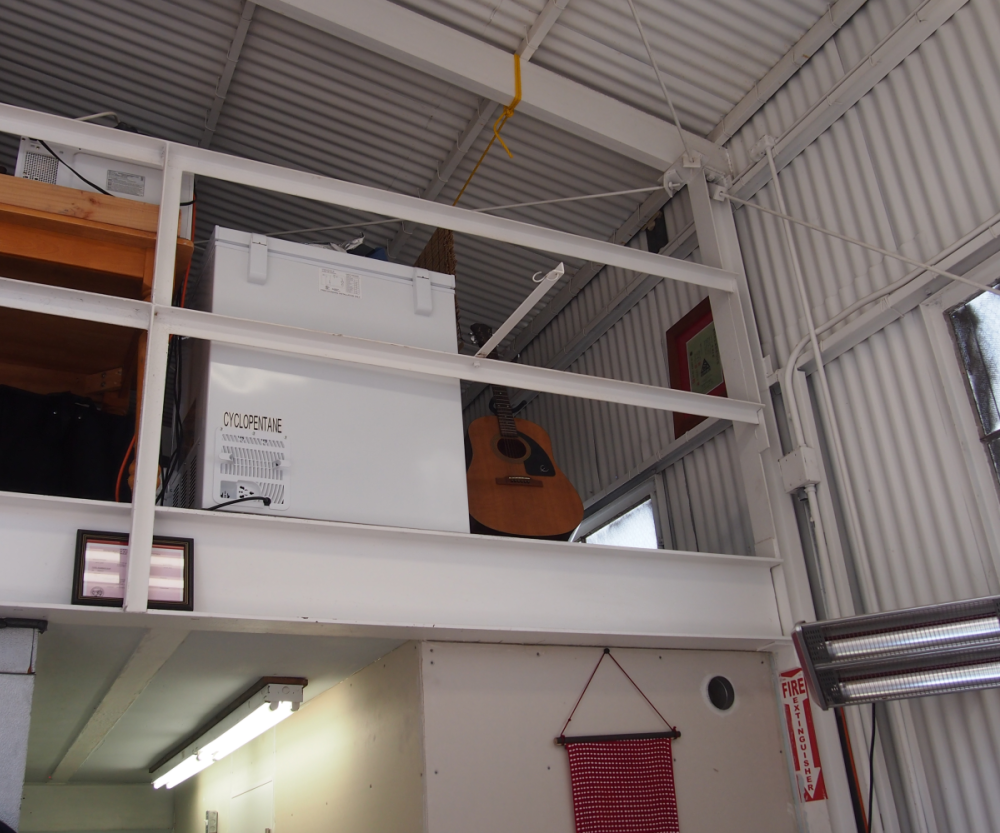 A musician who collaborates with world-famous artists became a sake brewer – while it sounds erratic, Yoshi says “Sake brewing is similar to song writing in terms of their introversion.”

“Sake brewing made me realize that my desire for creative work got bigger and bigger while communicating with customers through my restaurant job and sake class. The more I had to be extroverted at work, the stronger my desire for sake brewing became.”

I asked if he makes use of his experience as a musician for sake brewing, and he answered “I might use the same part of my brain.”

“When I started learning wine, I felt that I criticize it in the same way as I do for music. Though general people listen to a song integratedly, for instance, someone who plays music can differentiate sounds of each instrumental. Similarly, for sake tasting, I tend to analyze each aroma separately, such as banana, green apple, clay and so on.”

Yoshi translates subtle nuances and his own introverted feeling into a product attracting others – this similarity might have led a person who had lived with music to the journey of sake.